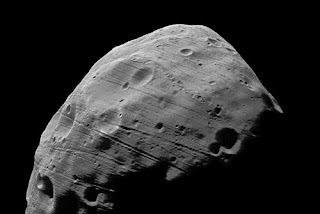 Notice the lines of strata on the planet in the photo?

Notice that the strata are not blotted out by impacts that formed deep craters, because the strata go deep and all the way through?

Check out the close up for better detail.

The European Space Agency (ESA), which took the photo, has had a space craft orbiting Mars for several years.

A revolution in the understanding of the planet Mars has been taking place as a result of that ESA mission, together with several U.S. missions to the red planet.

I want to talk about a hypothesis or theory, set forth by a well known astronomer, which would support a hypothesis that the strata lines on the object in the photo are there because, under the Exploded Planet Hypothesis or Theory, (EPH or EPT), it could be a photo of a chunk of a planet that blew up long, long, long ago.

Generally strata are laid down by the effects of erosion, either by liquid, atmospheric winds, volcanism of various sorts, or a combination of any or all of those over a long span of time.

If these lines are that type of strata, then it is likely that a very long time transpired during which the deposits that make up the strata were laid down.

Obviously that does not happen on any asteroid, or similar body, nor would such lines be at an angle opposite the gravitational direction as is the case in the photo.

Ok, so now you who didn't guess earlier know that the photo is of Phobos, the largest moon of Mars, and that it is not a photo of a planet.

But is it a chunk of the now missing planet which once filled the great gap between Mars and Jupiter, where now there are only asteroids remaining in the junk yard of rock and debris we call the asteroid belt?

A now missing planet which exploded and left the chunk in the photo to be caught by the gravity of Mars, and to then become a moon of Mars?

The EPH or EPT is an old idea which has been subscribed to by some good astronomers, who were of course criticized by their fellow astronomers because they did not follow the crowd to accept the theory pronounced "okay" by the government.

NASA is the government you know, and they are political you know. You didn't?

Anyway, some missions to Phobos are in the planning stages and we will "soon" find out about the strata on Phobos.

The EPH has had proven predictions in the past. The EPH has been tested enough, in my opinion, to move it up a notch to a theory, the EPT, but not everyone agrees.

The EPT predicts that when Phobos is studied closely and samples of the various layers in the photo are examined, it will be shown that they are, like strata on Mars, Earth, and other planets, the result of deposits over a long period of time.

If so, then the argument that Phobos is a chunk from a larger body or planet as set forth in the EPH or EPT will have been further justified.

Then we wait for the empire to strike back.

The next post in this series is here.
Posted by Dredd at 8:06 AM