Slipping Into A Secular Slide Zone 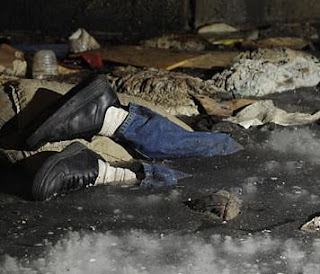 The homeless person in the photo will never be you, because you are special.

That is what the Roman Empire told itself and it's citizens. It repeated that mantra right up to the time it became that homeless person.

The footprints of the Roman Empire in history were the lasting thing; the last to go as it was swallowed up in the black hole of government miscalculation and unavoidable demise as a result of replacing fact with fiction.

Clearly we spend a lot of time and effort in the study of those footprints which we call the footprints of history. Why do we study history?

So we do not have to repeat those mistakes? That is hilarious. It is like saying "if we leave Iraq there will be violence"? Hilarious!

The main reason we should study history is to see whether we are moving closer to or further away from our goal of the secular and scientific survival of humanity.

I say that because the fundamentals are: 1) our sun will destroy this planet in the future; 2) this is the only place we can live now; 3) developing the technology will take more time than anything we have ever done; and 4) we have not yet discovered the first planet we must move to and colonize.

So how often do we talk about that in our news, our history, and amongst ourselves?

Religion talks about some aspects of it all the time. Science needs to catch up and the two should make peace and strengthen areas of agreement.
Posted by Dredd at 8:11 AM