“The end of the human race will be that it will eventually die of civilization.” (Ralph Waldo Emerson)

It is not in our genes (On The Origin of Genieology).

It is in our epigenetics (Hypothesis: The Cultural Amygdala).

Mitochondrion (On the origin of mitochondria: a genomics perspective)

"Why I don't care about 'Climate Change'"

We say that we are concerned about the inflation that is taking place.

The inflation that causes food prices to increase and 'buying power' to decrease ... That also causes economic instability ... Thereby threatening our life style ... which devolves into the reason "why we are not concerned about climate change" ... (a.k.a Global Warming).

This public psyche is because we have not been intimately acquainted with the fact that global warming induced climate change is a cause of those events (inflation).

The video at the bottom of this post explains, then, why we don't care about that.

I. Full of Wonder

One wonders why some things are baked into the cake:

"Despite being the wealthiest nation on the planet, the U.S. has continued to have the most COVID infections and deaths per country, by far, and it has the highest per capita death rate of any wealthy nation.

This is an unfathomable number of people dead, yet, mass media are downplaying it. This is despite an empathetic New York Times headline in May 2020 of “U.S. Deaths Near 100,000, an Incalculable Loss,” and using its entire front page to print names of some of the deceased. As Luppe B. Luppen noted on Twitter, the newspaper’s more recent headline was the cruel and callous “900,000 Dead, but Many Americans Move On.”

The Times is not alone; several large mainstream publications, in complicity with politicians of both major political parties, have been beating a death knell of a drum for getting “back to normal” for months. The effect is the manufactured consent to normalize mass death and suffering—to subtly suggest to Americans that they want to move on."

(Nothing Normal about One Million People Dead, emphasis added). But that type of media response to such things is ubiquitous (The Warming Science Commentariat).

Now a mere leak is mentioned more often than the coming flood is (Antarctica 2.0 - 14).

They seem to want to make it something that only beach-goers need to be concerned with:

(Why Sea Level Matters; sea ports should be mentioned first). On the less disastrous side (I don't use "the positive side" because it is mythical), they are coming around to mentioning their decades-long denialism:

"To make better predictions about the future impacts of sea level rise, new techniques are being developed to fill gaps in the historic record of sea level measurements. We know the factors that play a role in sea level rise: Melting glaciers and ice sheets add water to the seas, and warmer temperatures cause water to expand. Other factors are known to slow the rise, such as dams impounding water on the land, stymying its flow into the sea.

When each factor is added together, this estimate should match the sea level that scientists observe. Until now, however, the sea level "budget" has fallen short of the observed sea level rise, leading scientists to question why the budget wouldn't balance."

(NASA-led Study Reveals the Causes of Sea Level Rise Since 1900). It never balanced because they used the same techniques tRumpists use when "balancing" their financial matters (older textbooks about Antarctica were also problematic).

III. Don't Fear Y'all Are Here

Dredd Blog has bemoaned the YAH disorientation for many a post as regular readers know (Has The Navy Fallen For The Greatest Hoax?, You Are Here).

Never-the-less, the city-state of ancient Greece has returned:

"In coastal Texas and many other places, walled cities are making a comeback. It’s quite a turnabout, as the efficacy of defensive walls had declined precipitously since the age of the long bow. Barbarians still menace, of course. But the rekindled enthusiasm for defensive walls is a response to a different kind of threat."

(Texas Plans a Texas-Sized Response to Rising Seas). Yep, even bigger than the one to keep Gulf of Mexico out (Donate To Texas Y'all).

Like the senator indicated in a conversation with the Admiral in the video below, the answer is simple for Oil-Qaeda, "Build the seaports at sea level."

One wonders how Bob Dylan perceived his opening lyrics in "The Times They Are A-Changin'" hit:

(The Times They Are A-Changin', 1963). After all, it wasn't until 1988 (~2.5 decades later) that the famous/infamous scientist of NASA fame used different words with the same meaning when he spoke in person to the U.S. Congress (James Hansen).

It is not unlike some of the other ongoing mysterious information that we are becoming composed of:

"Assembly pipelines often result in viral genomes contaminated with host genetic material, some of which are currently deposited into public databases."

And when we try to demystify the science of poetry we are rebuffed (Quantum Biology - 9, It's In The GenBank - 4).

What that adds up to is that I have been buffed and rebuffed so many times I am like a new penny shining in the sum (It's Not Just For Sherman & Mr. Peabody).

But I digress, so, we might as well address the issue of red and blue states.

Today's appendices (Filled In, Not Filled In) show the states of water temperatures that are melting the largest desert on Earth.

The "Filled In" appendix shows, in red, the warmer-than-ice deep waters along the grounding lines of Antarctica's tidewater glaciers.

The "Filled In" appendix also shows, in blue, the colder-than-water ice along the grounding lines of Antarctica's tidewater glaciers.

The "Not Filled In" appendix lines simply show tidewater temperatures along with the melt temperatures of glacial ice in the ambient tidewater.

These graphics in the appendices exhibit the main reason for the change in ice sheets (it isn't surface melt nor calving) as pointed out by Dr. Eric Rignot in the second video below, beginning at about 7:50 minutes and continuing for several minutes, to about 12:30.

So, should we row v wade or just start swimmin'? 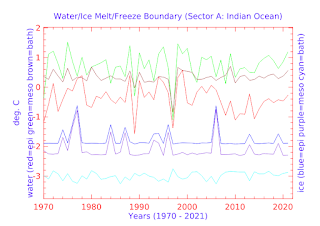 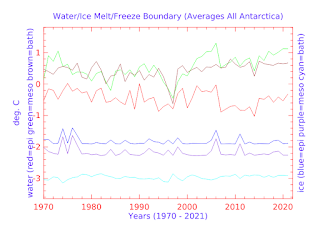 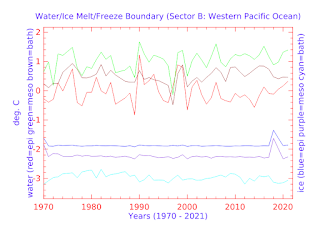 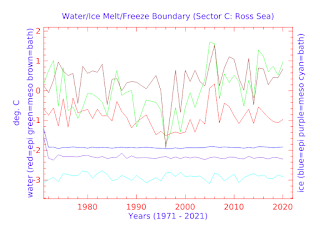 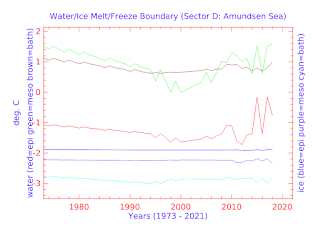 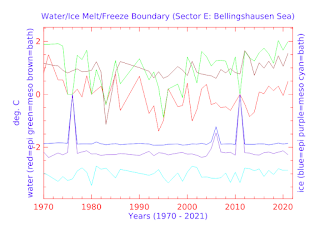 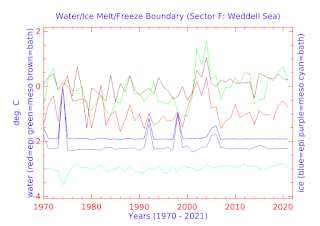 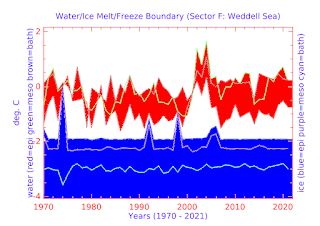 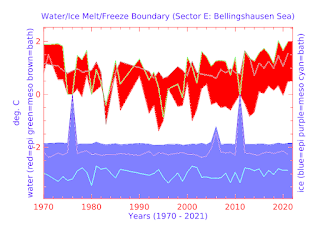 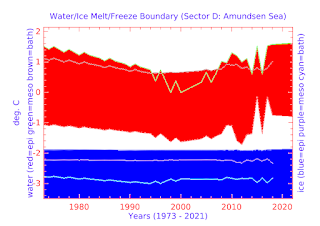 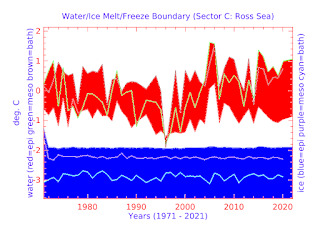 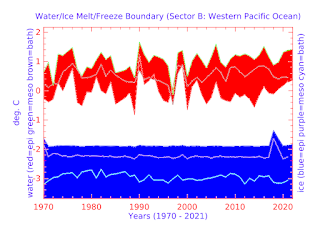 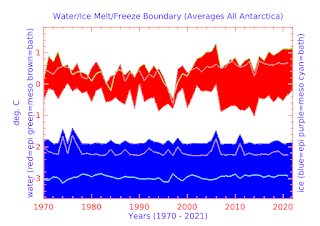 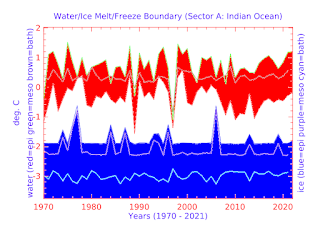 The lead opinion indicates that under the cover a conspiracy that Dredd Blog has been noticing has in fact been bubbling to the surface like a Russian Nuclear Submarine.

The McTell news (Blind Willie McTell News, 2, 3, 4, 5, 6) has always labeled all realities that they can't understand as conspiracy theories (On The Origin of "Conspiracy Theory").

That is just the way it is when someone has to tell us where we are (You Are Here - 8).

Which means several things for certain:

4) The intensity of commercials on TV and Social Media will Accelerate.