The Citizen Journalist In America - 4

[the video below is longer than the above transcript excerpt of it is].

Video of a War College presentation by Jeremy Jackson (from which the computer generated transcript above was taken):

In the previous post of this series the ice-melt temperatures related to Ocean Heat Content (OHC) were graphed for the six Regions/Areas along the coast of Antarctica.

Seawater temperatures were likewise detailed on the same graphs  (In Search Of Ocean Heat - 12).

That effort was in response to a couple of scientific papers which were misleading, but I did not delve into all of the most basic reasons for those kinds of misleading papers.

The most basic reason for the erroneous concepts about OHC is the failure to apply the principles of TEOS-10 in the first place.

"it is perfectly valid to talk of potential enthalpy, h0, as the 'heat content'

So, today I am presenting improved graphs which are supported by HTML tables that contain the TEOS-10 values which the graphs were generated from. (you can generate your own graphs from that HTML data)

The second basic reason for scientific papers that misrepresent the nature of OHC is the ignoring the application of Quantum Physics to oceanography (Fig. 1, cf. The Ghost Photons, 2, 3).

This is an appendix to: In Search Of Ocean Heat - 13 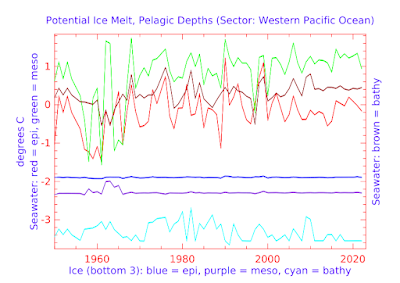 This is an appendix to: In Search Of Ocean Heat - 13 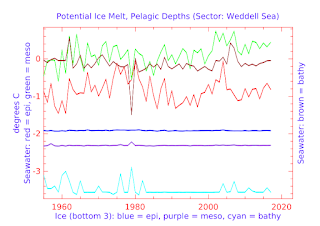