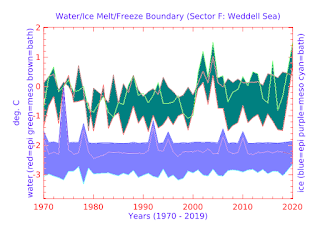 A Brief History of This Series

One of the most persistent myths of the global warming induced climate change era has been a myth about Antarctica's vast realm of tidewater glaciers.

It is or was a myth that was in every relevant text book and was also on the lips of glaciologists and oceanographers alike:

"This paper reviews the nature of the controversy concerning the stability of the East Antarctic Ice Sheet. The issue is whether or not the ice sheet experienced massive deglaciation during the globally warmer climate of the Pliocene around 3 million years ago and caused global sea level to rise some 60 m. The conclusion is that this did not occur and that the ice sheet has been stable for at least 14 million years. Why did this controversy arise? One reason is that the biostratigraphic evidence used to postulate deglaciation was taken out of its geomorphological context. The hypothesis took on a life of its own and the significance of contradictory geomorphological evidence was ignored for some years. Part of the responsibility for this state of affairs is that geomorphology, striving for a physics-based, analytical science methodology, has neglected long-term studies of landscape evolution which require the methodology of an interpretative, historical science."

(The East Antarctic Ice Sheet: Unstable Ice or Unstable Ideas?, emphasis added). That (now debunked fairy tale that East Antarctica is "stable" and will not melt) was just another tale inspired by Oil-Qaeda (Humble Oil-Qaeda). 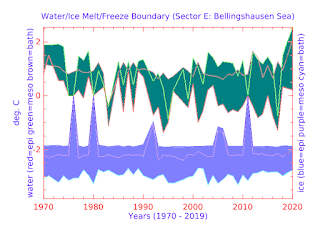 In the absence of that understanding one cannot make the quantum leap into the understanding that invisible-to-the-eye infrared radiation, composed of photons, inhabits the waters beneath the surface of the Southern Ocean. 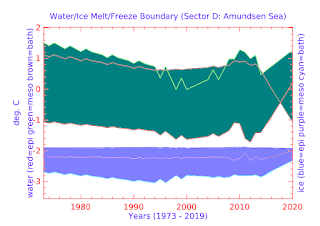 That particular ocean has a current that flows around it which contains more water than all of the fresh water rivers upon the land masses of the planet (Mysterious Zones of Antarctica - 2, quoting National Geographic).

The mighty water flow of that current goes deep down and touches the tidewater glaciers of Antarctica. 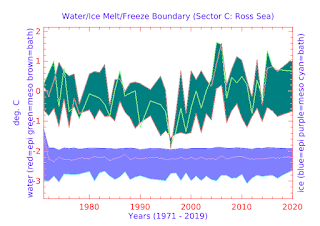 Forget The Mental Vision Which
The Word "Warm" Engenders

The use of the word "warm" has misled us to some degree.

I have been reminded of that time and again after Professor Rignot mentioned it in a Dredd Blog video.

To paraphrase a bit, he said "don't take a bath in water at this 'warm' temperature because you could get hypothermia."

That is part of what today's graphs are intended to convey, which is, a message about developing the understanding that can emerge when thinking in terms of "Quantum Oceanography" as applied to the dark tidewaters of Antarctica. 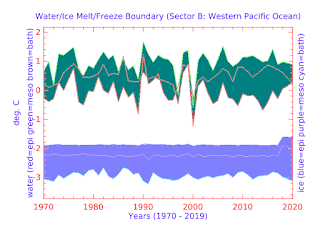 Even though those waters do not contain photons of visible light, those waters are composed of molecules/atoms that store ocean heat in the form of quanta.

The molecules of seawater can absorb and emit photons of infrared photon radiation in accord with the laws of thermodynamics. 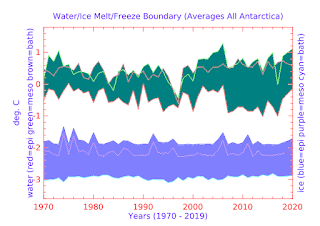 In other words, if photons do not flow into the glacial ice at or near the tidewaters under such conditions it would be breaking the laws of thermodynamics.

Note that the greater the distance between sections of the water values and the ice values shown on the graphs indicates an increase in the quantity of photon flow (a higher number of photons will flow from the water into the ice).

Using today's graphs for visual helps and for inspiration, it becomes easier to see why the glacial ice can be melted even by very cold seawater ('cold' in terms of how it would feel to our skin). 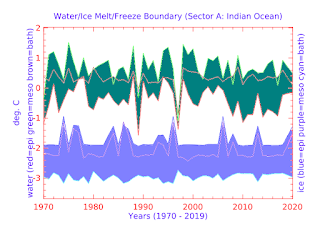 I should also mention here, as I have in previous posts of this series, that the TEOS-10 C++ software library is used to calculate relevant values.

I updated my SQL server's database of in situ measurements recently,so these graphs reflect research results up to the present year.