Groundhog Day & The Climate of Fear - 3

The fundamental activity of human civilization is repetition.

That is only a problem when that repetition becomes a function of insanity: "doing the same thing over and over again and expecting different results" (Groundhog Day & The Climate of Fear, 2).

Some of that fundamental repetition has become a "Houston we have a problem" scenario (The Extinction of Houston - 2).

The movie Groundhog Day was about a weather man who got hung up doing the same things over and over again to the point it became "bothersome."

He finally got a glimpse into what was happening, realized the import of it, and sought to escape the time vortex by sabotaging the relevant repetition trance (Choose Your Trances Carefully).

As we speak, the U.S.eh? (and civilization itself) is caught up in the same trance, which is thinking that doing the same thing, such as location denial (You Are Here), will produce a different result (Louisiana: The Latest on Flood Recovery, by the Numbers, Will New Orleans’ $14.5 Billion Walls Stand Up to the Next Big Storm? [Answer: NO, the Aug. 2016 Louisiana flood took place after that wall went up] ).

Civilization keeps on pumping green house gases into the atmosphere, keeps on burning fossil fuels, keeps on being a sycophant to Oil-Qaeda (Humble Oil-Qaeda), all the while expecting changes to magically take place as it repeats itself ad nauseam.


"The arguments over insurance coverage have not even begun, and then there is the question of how businesses in this perpetual flood zone will renew their insurance. Or how might they relocate to higher ground? And how do they pay for that? And where is higher ground in this vast, swampy lowland?

The public has been conditioned by frequent natural disasters to think that nobody has to eat the losses, so that in effect loss doesn’t exist,  just as the nation’s central bank has engineered the belief that risk no longer exists ..."

(Kunstler, emphasis added). In other words, once insanity takes hold, it becomes cancerous and spreads as far and wide as possible.

The sequence is: 1) damage the global climate system with the use of fossil fuels, 2) reap the then-damaged system's anomalous weather events, 3) deny that reality by saying these are only "10,000 year flood events" and the like, 4) repeat.

Yep, we who read history have seen this repetitive pattern before:


"In other words, a society does not ever die 'from natural causes', but always dies from suicide or murder --- and nearly always from the former, as this chapter has shown."
...
"In the Study Toynbee examined the rise and fall of 26 civilizations in the course of human history, and he concluded that they rose by responding successfully to challenges under the leadership of creative minorities composed of elite leaders. Civilizations declined when their leaders stopped responding creatively, and the civilizations then sank owing to the sins of nationalism, militarism, and the tyranny of a despotic minority. Unlike Spengler in his The Decline of the West, Toynbee did not regard the death of a civilization as inevitablhttps://www.yahoo.com/news/idaho-police-department-thanks-apos-085825106.htme, for it may or may not continue to respond to successive challenges. Unlike Karl Marx, he saw history as shaped by spiritual, not economic forces."

(Stockholm Syndrome: The Declaration of Intellectual Dependence). The question now remaining is: will we be around to see it after ?

The previous post in this series is here.
Nightblindness lyrics here ...

The graphic to the left is like this series, in the sense that it makes the point that when one analyzes a "system" one must avoid being trapped into analyzing individual parts (sub-systems) as if it is the system itself (The Damaged Global Climate System, 2, 3, 4, 5, 6).

The Global Climate System is no exception to that analytical rule, because a working understanding of the climate system requires not only a working awareness of the individual sub-systems, but one must also have a working knowledge of how the parts work together to compose and become a bona fide system.

When a system is damaged (by damage to one or more of its sub-systems), the system becomes "a damaged system."

A damaged system does not perform the same as it did when it was not damaged.

Here are some of the ideas involved in systems nomenclature:


1. Systemness: Bounded networks of relations among parts constitute a holistic unit. Systems interact with other systems, forming yet larger systems. The universe is composed of systems of systems.

2. Systems are processes organized in structural and functional hierarchies.

3. Systems are themselves, and can be represented abstractly as, networks of relations between components.

6. Systems evolve to accommodate long-term changes in their
environments.

9. Systems contain models of other systems (e.g. simple built-in protocols for interaction with other systems and up to complex anticipatory models).

One intergovernmental body describes the climate system as:


"The climate system, as defined in this Report, is an interactive system 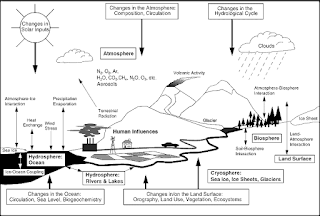 consisting of five major components: the atmosphere, the hydrosphere, the cryosphere, the land surface and the biosphere, forced or influenced by various external forcing mechanisms, the most important of which is the Sun (see Figure 1.1). Also the direct effect of human activities on the climate system http://www.foxnews.com/world/2017/09/01/pope-orthodox-leader-blame-moral-decay-for-ecology-crisis.htmlis considered an external forcing."

Weather is what the Global Climate System (composed of sub-systems) produces on any given day.

Weather is a different product at various locations around the globe, and it changes throughout the day and night, as well as changing with the seasons (Weather, Wikipedia, cf. NASA - What's the Difference Between Weather and Climate?).

The damaged system will engender anomalous activity at the sub-system and/or system levels, while the undamaged system (by definition) will not.

Once an undamaged system becomes a damaged system, the product it produces can be said to be "damaged goods."

So, detecting damage to the global climate system is an exercise in watching weather patterns (What Is A Weather Pattern).

Thus, it behooves researchers to define what is anomalous and what is normal.

We watch so as to be able to discern changes that are anomalous.

When we hear anomalous events described as "this is the new normal" we should suspect that damage has occurred to the climate system.

Asking whether or not an anomalous event is caused by "climate change" or "climate same" is flawed analysis that, like the blind men around the elephant, does not consider the "systemness" of the situation.

Anomalous weather is evidence of a damaged system which made that weather.

We often hear that "we can't determine if any individual weather event is the result of climate change".

That is the product of a wrong question, because it is devoid of systemic analysis concepts (it is like asking "did the climate produce this weather?" ... which is an invalid analytical question).

The proper question is: "was this an anomalous weather event?"

An undamaged system by definition cannot produce anomalous ("deviating from what is standard, normal, or expected") weather events.

An analysis produced by researchers who are reluctant to ask the proper questions, who are not looking for the correct answer, or are not interested in scientific analysis, is deceitful.

How many times have we heard that the still ongoing flooding in Texas is "unprecedented," all-time "record breaking," or "historic" (The Extinction of Houston - 2) ?

In other words, the weather event was anomalous ("deviating from what is standard, normal, or expected").

It was by definition, then, produced by a damaged global climate system.

We should, therefore, remember "the direct effect of human activities on the climate system is considered [to be] an external forcing" (IPCC).

It is entirely proper to say that all anomalous weather events are the result of a damaged global climate system that has been improperly changed by the external forcing of improper activities conducted by human civilization.

The Evolution and Extinction of Affordable Insurance - 2 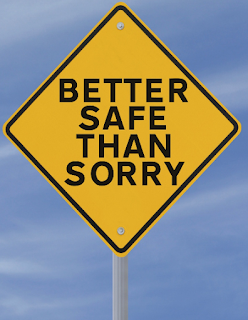 The deniers who are liars are saying that the "Houston we have a problem" syndrome playing out before our very eyes was not foreseeable (Harvey Didn’t Come Out of the Blue).

Those with competent foresight began to think about Global Warming induced Climate Change as a business risk way back in 1973 (see video below, speaker's first statements).

Email ThisBlogThis!Share to TwitterShare to FacebookShare to Pinterest
Labels: business

The Extinction of Houston - 2

The 4th largest city in the U.S.eh? is paralyzed in an ongoing anthropogenic disaster.

It is thereby confronted with an uncanny vision of the future (The Extinction of Houston).

But it is real now, not later, and it is happening to people alive today, not to their children sometime in the distant future.

In the first post of this series I contemplated sea level rise, which is a slow motion reality unlike the fast-forward scenario taking place in today's current ongoing disaster.

A disaster that is not only taking place in Houston, but is also taking place all along the Gulf Coast of Texas.

This catastrophe is brought on by Category 4 hurricane Harvey, which is now a tropical storm that is not leaving anytime soon enough, because there are no "steering fronts" to push it away, no jet stream to push it along to harm someone else somewhere else.

It still has a few days to go before we know for sure.

The ongoing slow sea level rise disaster doesn't help, because it is rendering large parts of the Houston metroplex into below-sea-level areas.

Today's danger, tomorrow's danger, and the danger the next day after that will unfortunately be views into the future of Houston and other U.S. cities along the coast, such as New York City.

I mean "views" that give us a true reality vision of what is slowly but surely coming (permanent inundation).

It is not pretty now, but it will be worse then.

The most striking thing to me is that there were days of forewarnings, (enough forewarning to have relocated the most vulnerable to safer places).

As a result, "as we speak," the emergency services are spread thin.

People have to wait four or five hours on the roofs of their houses for rescue, if rescue comes at all.

And there are more days of rain in the potential forecast, the highest being as much as five feet of rain accumulation in some places (now already piling up in rivers, lakes, streets, homes, roads, and businesses).

The denier governments are dumbing down those in danger areas, and thereby increasing death and injury to citizens who follow and believe those official deniers:


"But county and city officials responsible for addressing flooding largely reject these arguments. Houston’s two top flood control officials say their biggest challenge is not managing rapid growth but retrofitting outdated infrastructure. Current standards that govern how and where developers and residents can build are mostly sufficient, they say. And all the recent monster storms are freak occurrences — not harbingers of global warming or a sign of things to come."

(Texas Tribune). From the idiotic messages of the president on down to agency leaders, governors, and local mayors, they preach lies to their constituents and those constituents suffer for it.