A Deep Look At Latitude Layers

I used to wonder about how warmer water found its way to the great current around Antarctica (see the ACC).

The laws of thermodynamics taught me that hot flows to cold, warm flows to cool.

So, that would mean that the 93% of the increasing global warming from the Sun would spontaneously travel to cooler waters, thus, since the cooler waters, in most ocean locations, are at the deepest depths, I wondered if there are indications in the WOD database (Fig. 1) that would tend to verify that dynamic.

The menu below links to three sets of graphs which indicate the affirmative answer to that question.

The "hado" in many if not most cases is warmer than the shallower "abysso" indicating that the solar radiation makes its way to the deepest parts of the oceans.

The Meaning of "Conservative Temperature" is explained by (this or this).

A "MOL" (mole) is a specific number of photons (Einstein unit).

The "MOL Counts + Conservative Temperature" page has graphs of the proportion of photon quantity to temperature.

The "take-home" is that CT is a value that is preserved and consistent in all depths and turbulent areas in the currents of the ocean.

If you want to generate your own data & graphs you can download a TEOS-10 library at no cost here (That C++ library was  used to generate today's graph data, but not the graphs). 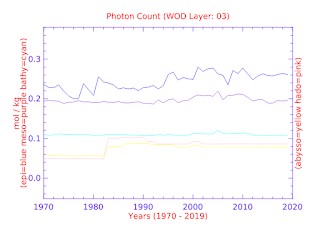 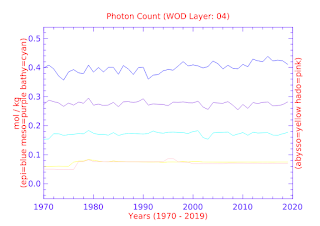 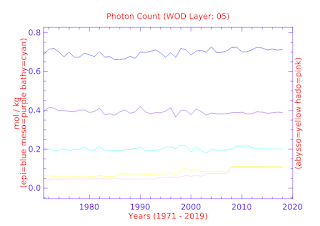 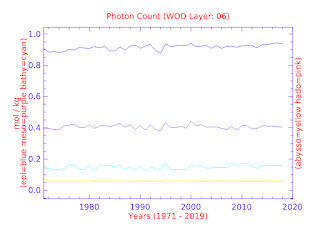 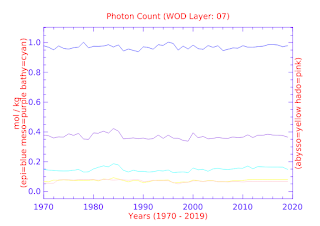 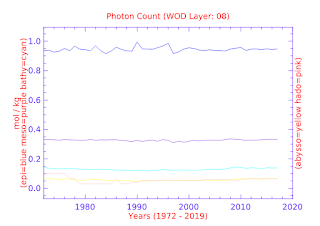 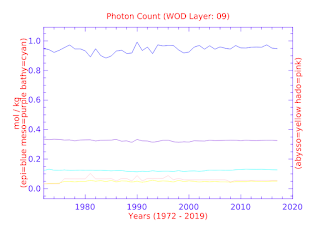 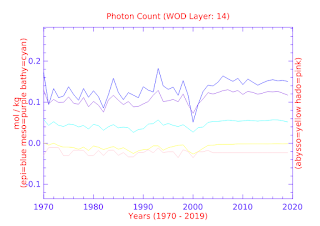 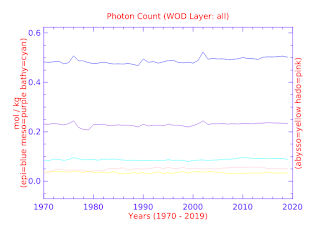 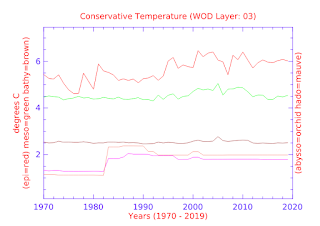 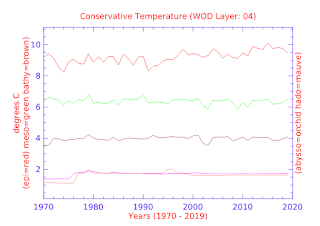 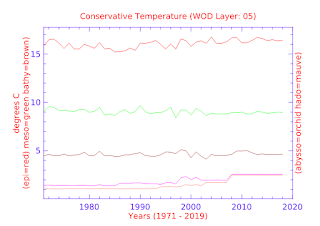 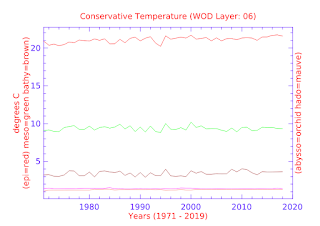 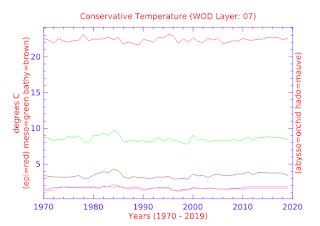 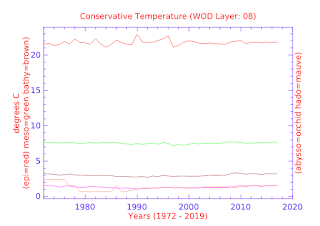 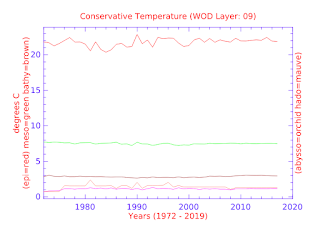 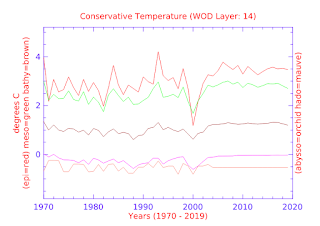 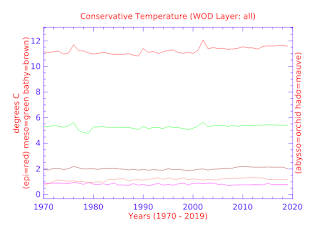 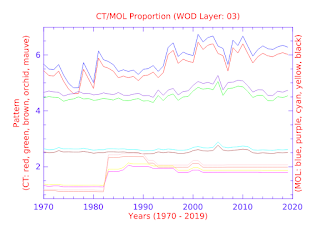 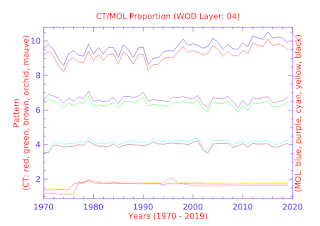 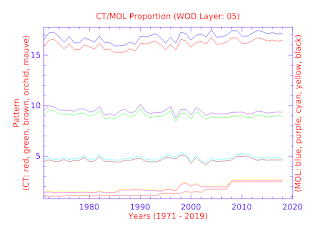 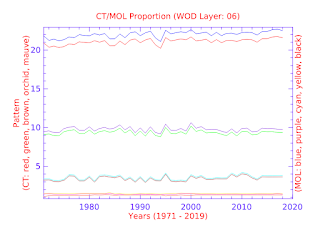 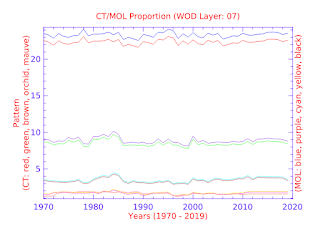 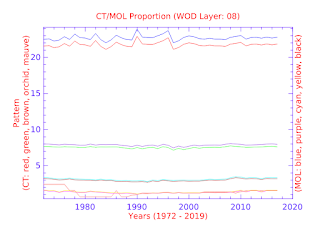 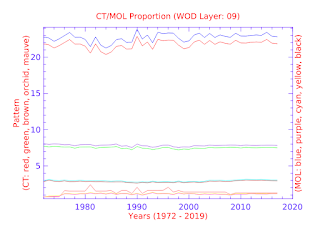 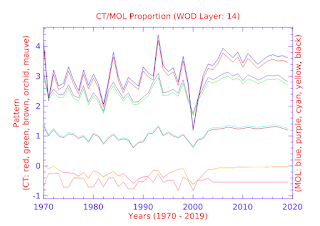 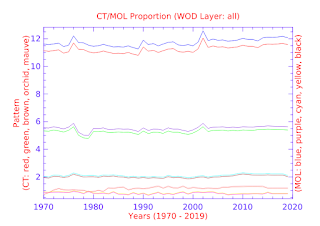 That is because most citizens understand that form of "the language" of approaching danger, especially when the danger approaching is a known type of catastrophe.

What you should not miss, if you peruse any or all of those links, is that the series is not focused primarily on individual ignorance.

Instead, the gravamen of the series is cultural ignorance:

"Agnotology ... is the study of culturally-induced ignorance or doubt"

(Agnotology: The Surge, Feb. 2012, emphasis added). This begs the question "how can a "culture" induce ignorance and/or doubt?"

A once most-often-quoted historian did a comprehensive study of the subject, and his findings were placed into a famous encyclopedia:

"In the Study Toynbee examined the rise and fall of 26 civilizations in the course of human history, and he concluded that they rose by responding successfully to challenges under the leadership of creative minorities composed of elite leaders. Civilizations declined when their leaders stopped responding creatively, and the civilizations then sank owing to the sins of nationalism, militarism, and the tyranny of a despotic minority."

(Encyclopedia Britannica, emphasis added). Toynbee had written in his study mentioned in that quote, the following:

"In other words, a society does not ever die 'from natural causes', but always dies from suicide or murder --- and nearly always from the former, as this chapter has shown."

(A Study of History, the volume by Arnold J. Toynbee). Another very-often-quoted scholar, the "father of psychoanalysis," hoped that one day cultures could be psychoanalyzed to determine when they were becoming suicidal or murderous:

"If the evolution of civilization has such a far reaching similarity with the development of an individual, and if the same methods are employed in both, would not the diagnosis be justified that many systems of civilization——or epochs of it——possibly even the whole of humanity——have become neurotic under the pressure of the civilizing trends? To analytic dissection of these neuroses, therapeutic recommendations might follow which could claim a great practical interest. I would not say that such an attempt to apply psychoanalysis to civilized society would be fanciful or doomed to fruitlessness. But it behooves us to be very careful, not to forget that after all we are dealing only with analogies, and that it is dangerous, not only with men but also with concepts, to drag them out of the region where they originated and have matured. The diagnosis of collective neuroses, moreover, will be confronted by a special difficulty. In the neurosis of an individual we can use as a starting point the contrast presented to us between the patient and his environment which we assume to be normal. No such background as this would be available for any society similarly affected; it would have to be supplied in some other way. And with regard to any therapeutic application of our knowledge, what would be the use of the most acute analysis of social neuroses, since no one possesses power to compel the community to adopt the therapy? In spite of all these difficulties, we may expect that one day someone will venture upon this research into the pathology of civilized communities. [p. 39]
...
Men have brought their powers of subduing the forces of nature to such a pitch that by using them they could now very easily exterminate one another to the last man. They know this——hence arises a great part of their current unrest, their dejection, their mood of apprehension. [p. 40]"

(Civilization and Its Discontents, S. Freud, 1929, emphasis added). All of this that both Toynbee and Freud mentioned is within the purview of "Agnotology."

So, to sorta sum it up, there is no existing methodology to help civilizations, societies, cultures, or whatever you want to call a large group, avoid its own suicide, or avoid murdering another large group.

Perhaps the United Nations represents the current state of development on the pathway toward that goal:

“The state of the planet is broken. Humanity is waging war on nature. This is suicidal.”

(U.N. Secretary-General António Guterres). Ok, so let's get into the therapy.

It is no doubt a time for nations to reconsider and double down on the search for the cause of mass-suicide and world wars.

The '60's "Hippy Movement" should not be condemned for wanting "Love and Peace" by a civilization that could slip into "War and Hatred" just around the bend.