Phases Of An Empire Freezing To Death 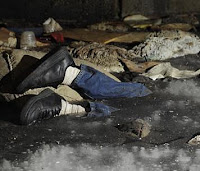 For every macrocosm there is a microcosm or so.

When one asserts a microcosm as a fit for a particular macrocosm, the entire exercise used to validate that assertion is to offer a number of links for proof of the concept.

We call each link a nexus. If each nexus is valid, and there are a sufficient number of them, we have a match.

The photo and original post on Dredd Blog can be used as an example of how difficult it is to navigate through such a scenario.

Even when it is true we wonder "how does a human being freeze to death with other humans around", even within earshot?

How does a fellow human end up partially encased within a block of ice in a populated modern 'down town'?

So how, then, would an empire metaphorically freeze to death?

Let's use an article written by a fellow who actually went through phases of freezing. A scenario we can use as a microcosm.

He points out that "When your Jeep spins lazily off the mountain road and slams backward into a snowbank, you don't worry immediately about the cold. Your first thought is that you've just dented your bumper."

Our set of priorities is a shape shifter which changes shape depending on circumstances. Our priorities are a chameleon, a state of camouflage, set to reform at any given time. Empires have priorities called policy.

When an empire gets into economic trouble, war trouble, health trouble, and political trouble, its initial reaction is similar: "This too will pass ... troubles always come to an end" will be spoken by the mouthpieces and felt by the recipients eager to agree throughout the empire.

The next chain of thoughts: "Your second is that you've failed to bring a shovel. Your third is that you'll be late for dinner. Friends are expecting you at their cabin around eight for a moonlight ski, a late dinner, a sauna. Nothing can keep you from that."

An empire will generally have gone through the process that develops broad based and well organized propaganda institutions, which believe in repetition (a pillar of propaganda) thus the empire's second reaction: "This too will pass ... troubles always come to an end" will be spoken by the mouthpieces throughout the empire.

The article points out that the individual person goes through several other phases until "your core temperature reaches 93, amnesia nibbles at your consciousness. You check your watch: 12:58. Maybe someone will come looking for you soon. Moments later, you check again. You can't keep the numbers in your head. You'll remember little of what happens next ... Your head drops back. The snow crunches softly in your ear. In the minus-35-degree air, your core temperature falls about one degree every 30 to 40 minutes, your body heat leaching out into the soft, enveloping snow. Apathy at 91 degrees. Stupor at 90 ... At 86 degrees, your heart, its electrical impulses hampered by chilled nerve tissues, becomes arrhythmic. It now pumps less than two-thirds the normal amount of blood. The lack of oxygen and the slowing metabolism of your brain, meanwhile, begin to trigger visual and auditory hallucinations."

The empire hallucinates that money and military might will solve all of the mounting problems. Spend more money, send more troops; while the folk singers in the empire sing:

(Silvio, by Bob Dylan). Ah yes, the heart; down close to the soul. The heart grown cold sends cold to the soul.

And it has hallucinogenic consequences. Propaganda freezes an empire's heart and the consequence is loosing touch with what is really happening.

Empirical hallucination begins to feed the soul of the empire. Thus, the proper thing to do inches, then hops, then flies further and further away.

The individual solution becomes, "At 85 degrees, those freezing to death, in a strange, anguished paroxysm, often rip off their clothes. This phenomenon, known as paradoxical undressing, is common ...".

The empire's solution is to imagine that the emperor has clothes even though the emperor is naked; "This too will pass ... troubles always come to an end" will be spoken by the mouthpieces and felt by the recipients eager to agree throughout the empire.

They hallucinate that the past is the present and the future; inconveniently forgetting that cold is not warm.

Read the whole story; it is quite interesting.

Then use your own imagination to apply it to the empire example, remembering, "a heart grown cold".

A focused discussion of the topic of "paradoxical undressing" is available in the article Paradoxical Undressing [The article was removed, so here is The Wayback Machine Copy - scroll down to view/read it].