The Germ Theory - of Government - 4

In the previous post of this series is the statement "[o]ne hope expressed in this series [is] a hope for a future vaccine for politicians."

Recent works in microbiology and neurobiology are presenting a view of research data which indicates that in fact toxins from microbes is a reasonable place to look for the toxins of power which intoxicate those in power:


... literature is coming out now reporting neuropsychological testing on men who are Toxo-infected, showing that they get a little bit impulsive... And then the truly astonishing thing: two different groups independently have reported that people who are Toxo-infected have three to four times the likelihood of being killed in car accidents involving reckless speeding... Maybe you take a Toxo-infected human and they start having a proclivity towards doing dumb-ass things that we should be innately averse to, like having your body hurdle through space at high G-forces. Maybe this is the same neurobiology... On a certain level, this is a protozoan parasite that knows more about the neurobiology of anxiety and fear than 25,000 neuroscientists standing on each other's shoulders... But no doubt it's also a tip of the iceberg of God knows what other parasitic stuff is going on out there. Even in the larger sense, God knows what other unseen realms of biology make our behavior far less autonomous than lots of folks would like to think.

(Hypothesis: Microbes Generate Toxins of Power, quoting Dr. Sapolsky). Another science team points out that they have discovered the language that certain microbes speak:


I remember the day we found the gene for the inter-species signaling molecule like it was yesterday. We got the gene and we plugged it into a database. And we immediately saw that this gene was in an amazing number of species of bacteria. It was a huge moment of realization. We had wondered for so long what this second molecule was for, and the database told us in an instant this must be about cross-species communication.

(Microbial Hermeneutics, quoting from the interview). The discovery of the microbial language facilitated the science team being able to develop the capability to send messages in the microbe's own language, using a vaccination of "molecular words," which stops the microbes from community behavior by preventing them from being able to communicate effectively, and thus stops them from a coordinated effort to intoxicate / infect their host:


Current antibiotics work in only a few ways — they pop membranes, they prevent DNA replication — but the bottom line is, they either kill bacteria or they stop bacterial growth.

An anti-quorum sensing-type compound would simply prevent bacteria from counting one another. In essence, the bacteria would “think” they were alone when they are actually in a group. Alone, they don’t initiate virulence cascades. So, if the bacteria can’t count themselves and thus, can’t carry out these group virulence activities that are critical for enabling them to stay in the host, the immune system just gets rid of them.

Such a drug would not be an antibiotic. It would simply give your immune system a little extra time to do what it’s supposed to do: constant surveillance, and get rid of harmful invading microbes. But I don’t know what you’d call it — it’s a funny question. Many scientists are investigating different bacterial traits that could be similarly exploited. Behavior modification drugs? Maybe that’s what I should call them.

(Microbial Hermeneutics, quoting from the interview). The bottom line is that we are moving closer to a time when politicians and others in power who are exposed to the toxins of power can be treated with a vaccination that speaks the language of the toxins of power, and can tell them to "simmer down now."

The Holder of The House of Cards - 2 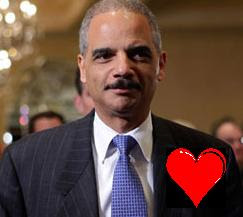 "Lean Forward" is a mantra that is getting around these Glory Daze.

I interpret it to mean that things are going to be lean, going "forward", because the old economy has become a plutonomy.

Alas, the old constitutional republic has become a plutocracy.

Thus, there isn't a lot the titular figure heads can do but to try to save their own skins, and the skins of their fellow worshippers in the bully religion posing as wholly US batman.

In that lite, here is the post of 2009 on this date, just as a reminder:
We have discussed the struggle Eric Holder has as U.S. Attorney General, here, here, and here.

In some ways it is a more difficult struggle than the one President Obama faces.

I think Holder understands that, but I do not think that Obama understands it in the focused manner that Holder does.

Obama does not understand it because he is surrounded by political advisers who seek to placate under the guise of bi-partisanship on the issues Holder has to deal with.

Add to that the fact that Holder is surrounded by advisers who do not have a political perspective, but instead they have a much narrower focus which is "nobody is above the law".

Newsweek reports that there is serious consideration within the Attorney General's Office about appointing a special prosecutor to deal with the Bush II regime's torture of prisoners within their custody.

That Newsweek article is a good one to be sure, however, it frames the stage as a scene with a struggle between Holder and Obama.

I am certain that Obama will go along with Holder if Holder does in fact appoint a special prosecutor to deal with the subject matter.

A.G. Holder will do well to choose the independent prosecutor very, very carefully.

Not as the White House political advisers would, but as those who know that the rule of law is far more important in the long run than any one administration is.

In the first and second posts of this series we focused on general issues of what George Orwell called "bully worship".

Orwell indicated that it was a "universal religion".

Clearly, aggressive or violent behavior is used by bullies to intimidate those they perceive to be weak, but there are other aspects of the bully reportoire that should not be forgotten.

Today, I assert that propaganda is at its core a bully activity, intended to take your awareness away from you through the operation of deceit.

One way to comprehend this would be to compare a version of the things you hear on McTell News with what Dr. Noam Chomsky informs us of.

Especially those versions that concern recent events in the Middle East, in regard to the "Arab Spring", and/or the "Global Occupy Movement".

The Evolution of Cosmic Adults - 2

How much have we evolved since this date in 2009 when the first post of this series was published?

Maybe our heads and brains are a different shape/size, continuing what they have been doing for a century or so?

Maybe our government is giving up the bully ideology and we are becoming a kinder and gentler nation?

Maybe this isn't the Sixth Mass Extinction, caused by The Anthropocene Epoch anymore?

Maybe we don't make the Earth hotter at the equivalency of 400,000 Hiroshima type nuclear bombs per day anymore?

Here is the text of that post:
The G8 Nations are meeting again.

Which means that 85% of the world population is left out of G8 summits.

Even among the fraction that was represented at the G8 summit, they cannot agree among themselves exactly how to proceed to solve the mounting and fast approaching problems that will bring catastrophe to their populations and economies.

Will this lack of agreement increase or decrease when most of the world's population is represented in a G-All summit?

The evolution and religion we teach in our institutions on this planet is not yet producing even planet-wise adults, in terms of which ideology and behaviour is dominating within human endeavours, much less producing cosmic adults.

Under the tenets of ecocosmology our teachers and our entire earth culture must do much better than that.

In fact, the teachers and the earth culture must eventually produce cosmic adults if the children of mother earth are to survive.

A recent Pew Research Study reveals some promising and some disturbing factors about the U.S. public's view of science, and the government's suppression of it.
The previous post in this series is here.

Below is a video clip from "The Newsroom", a new series on HBO:

Email ThisBlogThis!Share to TwitterShare to FacebookShare to Pinterest
Labels: mind 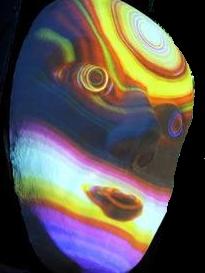 In past posts regular readers have read about symbiotic microbes, which are microbes that live in us and are us, which do good things for us (see The Human Microbiome Congress and The New Meaning of "Human").

This post will focus on the import and/or implications of two other Dredd Blog System posts.

The first being On The Origin of Propaganda, and the other Hypothesis: Microbes Generate Toxins of Power - 6, which both point out a realm of sinister, parasitic microbes.

But more than that, I want to show that some of our national institutions are interested in doing, and most likely are doing, exactly what those very dangerous parasites do.

In the process, readers just may see that Aldous Huxley was on to a reasonable suspicion or expectation, not a wild-eyed rant, when he said:


“There will be, in the next generation or so, a pharmacological method of making people love their servitude, and producing dictatorship without tears, so to speak, producing a kind of painless concentration camp for entire societies, so that people will in fact have their liberties taken away from them, but will rather enjoy it, because they will be distracted from any desire to rebel by propaganda or brainwashing, or brainwashing enhanced by pharmacological methods. And this seems to be the final revolution.”

(Sickology vs. Penology, quoting Huxley). There are several ways to look at that statement, which was done in a metaphorical sense in that Dredd Blog post, pointing out that the "pharmacological method" was addiction to oil.

But today I focus on a more literal version of that statement with a quote from a professor at Stanford University:


You want to know something utterly terrifying? Here's something terrifying and not surprising. Folks who know about Toxo and its affect on behavior are in the U.S. military. They're interested in Toxo. They're officially intrigued. And I would think they would be intrigued, studying a parasite that makes mammals perhaps do things that everything in their fiber normally tells them not to because it's dangerous and ridiculous and stupid and don't do it. But suddenly with this parasite on board, the mammal is a little bit more likely you go and do it. Who knows? But they are aware of Toxo.

(Sapolsky, see also this). The use of propaganda practising microbes to develop a "pharmacological method" of controlling behavior is the subject of many horror movies no doubt, but it is also a reality in today's world.

The reports of developing and using LSD on people in experiments, developing germ warfare weapons of mass destruction and the like, is common knowledge.

No doubt Huxley was prescient in his contemplation of these matters.