"If we knew what it was we were doing, it would not be called research, would it?" (Albert Einstein)

In a previous post of this series this question was pondered:

"This raises the question, do the 'salinity' elements in seawater emit the infrared photons that melt glacial ice, or do the h2o molecules in seawater do it alone?

Today's graphs are in appendices: Sector A, Sector B, Sector C, Sector D, Sector E, and Sector F (they may help answer the question).

They indicate 'maybe both' (i.e. both the h2o molecules and the other 'salinity' molecules in seawater may all emit infrared photons which enter the glacial ice's h2o molecules and cause a heat increase until melting takes place..."

(Quantum Oceanography - 10). One reason that the concept of "infrared photons" was featured in that question session is that "ocean heat" means "potential enthalpy" in oceanographic nomenclature (McDougall, 2003).

The CT, ho, and photon count (moles) patterns are heat-energy oriented, and they match each other in the graphs, while the "salinity" (SA) pattern is based on chemical content and does not match the ocean heat pattern.

Thus, it does not seem unreasonable to associate ocean heat (ho), infrared photon quantity in seawater (moles), and temperature (CT) together.

"Your heart is like an ocean, mysterious and dark." (lyric from video below)

This is an appendix to: Quantum Oceanography - 12 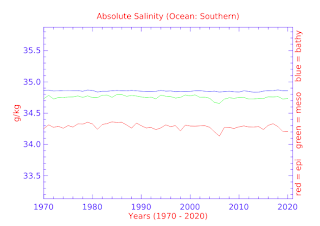 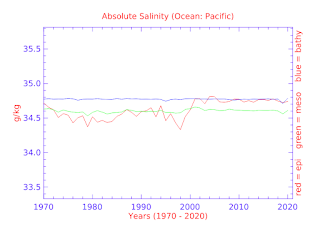 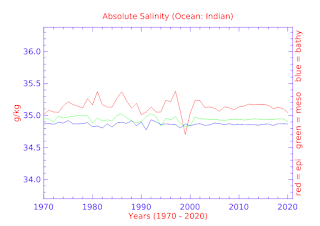 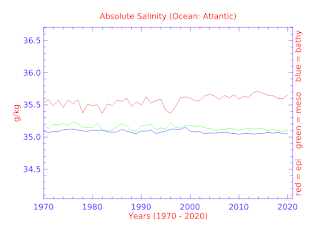 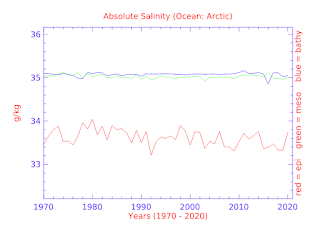 The World According To Measurements - 27

"If we knew what it was we were doing, it would not be called research, would it?" (Albert Einstein)

But even that technique (measuring) has moments of "if we knew what we were doing" ... such as "how do we measure thermal expansion and/or contraction?"

I am talking about the thermal expansion and/or contraction of the vast amount seawater in the world's oceans which we know less about than we know about the Moon and Mars (The World According To Measurements - 24).

So, let's revisit the technique for measuring thermosteric seawater change, of which it is said:

"A common practice in sea level research is to analyze separately the variability of the steric and mass components of sea level. However, there are conceptual and practical issues that have sometimes been misinterpreted, leading to erroneous and contradictory conclusions on regional sea level variability. The crucial point to be noted is that the steric component does not account for volume changes but does for volume changes per mass unit (i.e., density changes). This indicates that the steric component only represents actual volume changes when the mass of the considered water body remains constant.


(On Thermal Expansion & Thermal Contraction - 38). That is what informed me of the need to consider keeping the boundaries of what is being measured constant.

So, since the time when that became my understanding I use the World Ocean Database (WOD) Manual's "Appendix 11" depth levels as 'constants' (WOD Manual) for each WOD Zone (WOD Link) depth.

After years of going through my SQL database, perusing the years of measurements I have downloaded from the WOD database, I have developed a process.

For each zone and depth, (simulated @ Fig. 2 red lines) I use the TEOS-10 C++ software to carefully derive the thermal expansion and contraction at each of those 33 WOD depth levels in each of the hundreds of WOD zones.

That is, I use those WOD depth levels as constants while doing the fundamental calculations of thermosteric changes.

But sometimes I will average the 33 depth level results into 5 pelagic depth levels (for graphing purposes).

Here is a review of the process:

3) Use the formula V1 = V0 * (1 + (β * DT) ) to calculate, zone by zone and depth level by depth level, the fixed volume of each of those zone/depth level areas for each year of the time span (number of years) I am working with, where:

Note also that as "DT" changes from year to year those calculated thermal expansion/contraction values determine the bottom line (increase, decrease) change in the thermosteric ocean volume for that zone and depth level.

Today's graphs are not designed to display the full picture of those calculations.

Instead, today's graphs are designed to show that picture for the top three Pelagic depth levels.

I do this to emphasize the TEOS-10 proportionality patterns throughout the ocean depths, as well as the lack of proportionality of the thermal expansion changes with TEOS-10 ocean heat patterns.

The graphs are in the following appendices: (Southern, Pacific, Atlantic, Arctic, Indian, and Four Panes).

If you notice carefully, you will see that the TEOS-10 constructs CT and ho match the quantum physics concept of moles (number of infrared photons per kg) in "ocean heat", a.k.a. "potential enthalpy", but the thermal expansion/contraction pattern does not match the TEOS-10 patterns (cf. Quantum Oceanography - 11). 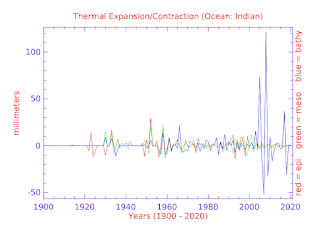 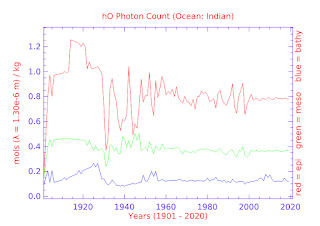 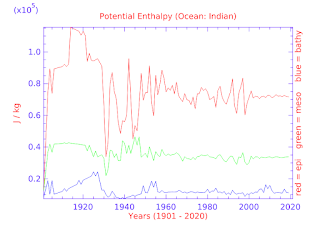 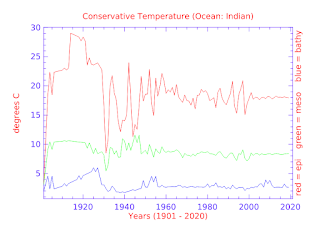 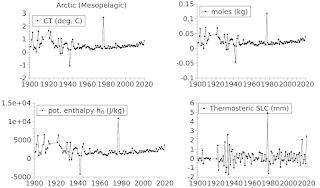 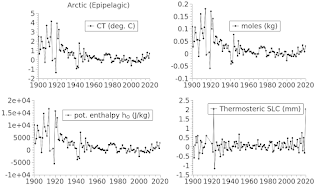 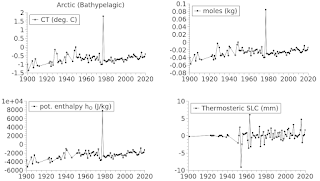 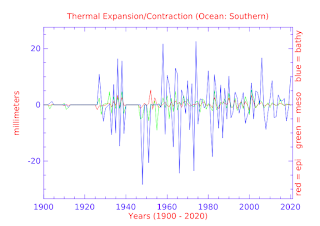 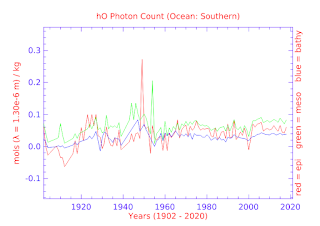 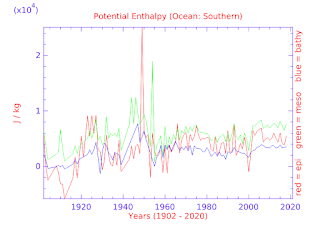 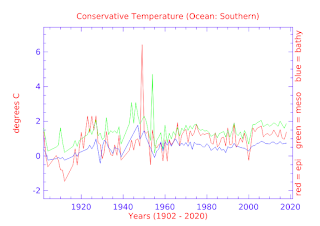 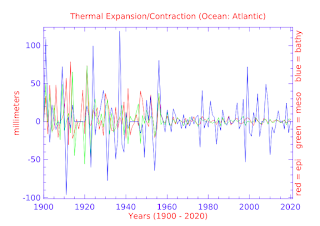 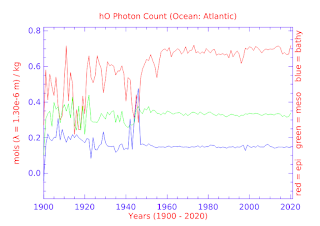 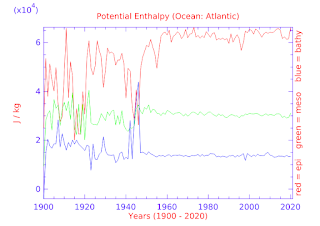 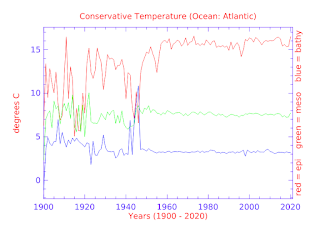 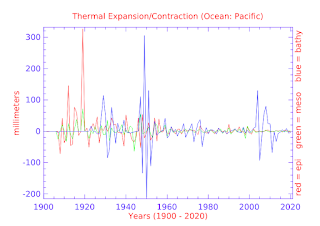 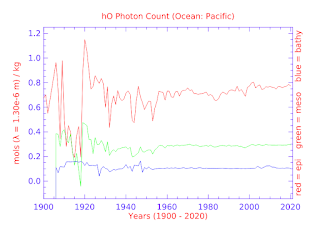 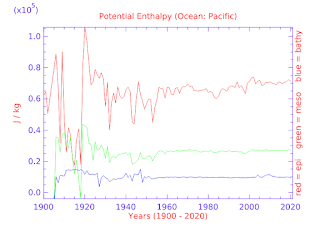 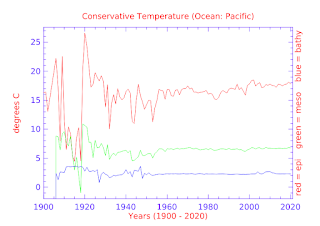 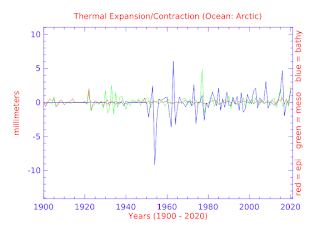 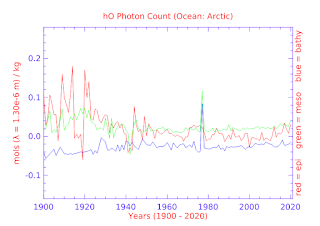 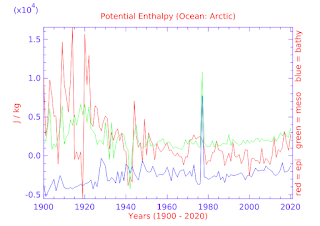 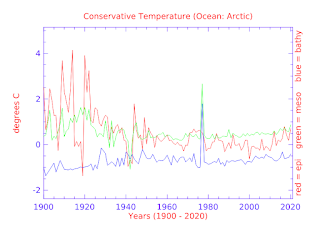