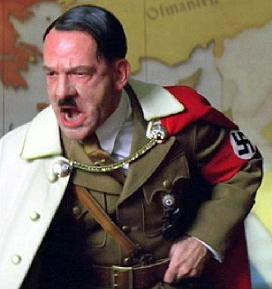 Morning Joe and Pat Buchanan on MSNBC are trying to earn the Goebbel Piece Prize.

That prize is given out for the MSM pundit who repeats the sayings of Joseph Goebbels or displays the Goebbel philosophy the most in one day.

Today they are advocating and justifying torture in a way that would make Goebbel proud of them, and therefore they win the prize.

First, they find a detainee guilty without due process in violation of the US Constitution. Goody Goebbels, one point.

Then after presuming that guilt they compare killing 3,000 people (which they say he did because he confessed during torture) with sleep deprivation.

From there they go to "since we have the right to hang him we can do other things too, especially torture". Goody Goebbels, two points.

They forget that their shameful performance will be around to view on video just like the Nixon tapes are.

Pat Buchanan is incapable of learning any lesson he should have learned while working for Richard Milhouse Nixon.

His legacy in American life is to turn us into NAZI fascist pigs it seems, so he wins the Goebbel piece of crap prize today.
Posted by Dredd at 5:43 AM