This series is about how to apply quantum mechanics to seawater (Quantum Oceanography, 2, 3, 4, 5, 6).

The application of the Thermodynamic Equation Of Seawater (TEOS-10 toolkit, C++ version) is phase one.

Using the TEOS-10 concepts of Conservative Temperature (CT) and Absolute Salinity (SA) researchers can plumb the ocean depths in ways that were not available prior to TEOS-10.

The use of in situ measurements from the World Ocean Database (WOD) that are converted into TEOS-10 values is the foundation of this area of Dredd Blog research.

Once those values are calculated Dredd Blog uses those and the "Photon Class" (C++ programming language) to calculate the number of moles (mols) of photons per kilogram of seawater.

This is important because the Second Law of Thermodynamics, among other things, indicates that hot flows to cold (heat flows to areas with less heat until equilibrium is reached).

In one realm within Oceanography, which deals with the place where seawater causes glaciers to melt, this is an important consideration (Antarctica 2.0 - 11).

It is a breakthrough to realize that this "ocean heat" transfer is a function of infrared photon flow from the molecules in seawater into the molecules of glacial ice.

In today's post we are considering those dynamics as they apply to the Southern Ocean surrounding Antarctica (see Fig. 1 and Fig. 2).

The gist of it is that TEOS-10 contains the refined scientific formulas that allow exploration of thermal dynamics in seawater based upon the in situ measurements taken with CTD instruments.

As Dr. McDougal and Dr. Barker show with the Teos-10 function "gsw_potential_enthalpy" and the paper Potential Enthalpy: A Conservative Oceanic Variable for Evaluating Heat Content and Heat Fluxes
(McDougall 2003, EGU 2021), it is proper to call ho "ocean heat".

For additional clarity, the conceptual and thermal linkage patterns of CT, ho, and photon count is detailed on one graph as Quantum Proportion (Qp),

The logical relation among CT, ho, and quantity of infrared photons (mols/kg) is a natural proportion, because the CT pattern is linked to the amount of ocean heat, which is stored in the seawater molecules as infrared photons.

That is the essence of Quantum Oceanography in terms of how ocean heat is transferred a la the Second Law of Thermodynamics.

Ocean model calculations as well as white-board non-quantum calculations concerning heat transfer (via hO) from the seawater into the glacial ice are likely to underestimate the melting of the ice unless they consider a sort of hidden 'game changer'.

That is, the photons from the seawater can radiate from three atoms (two hydrogen, one oxygen) in H2O molecules, but also from even more atoms in the molecules of the 'salinity' (SA) elements (Cl−, Na+, SO24−, Mg2+, Ca2+, and K+).

Thus, the seawater-originating photons radiate into the glacial ice that generally contains only H2O molecules, i.e. no 'salinity'.

Nevertheless, more photons ('heat') end up in the glacial ice H2O than were in the seawater H2O due to the 'additional' photons emanating from the 'salinity' quanta portion of seawater.

This is an appendix to: Quantum Oceanography - 7 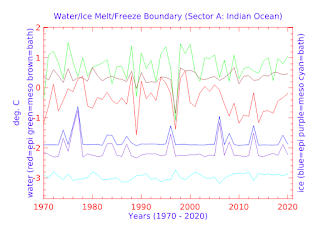 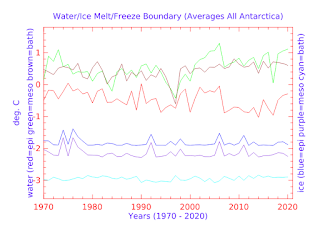 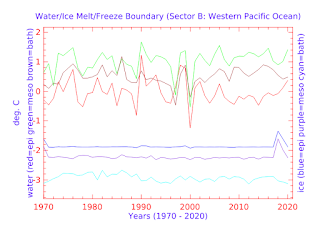 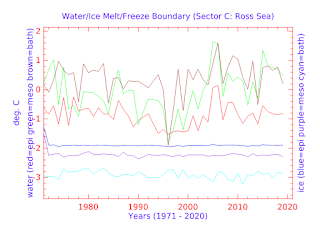 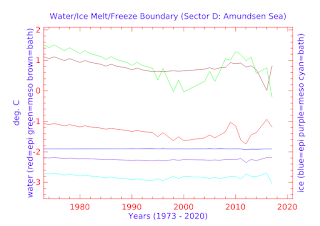 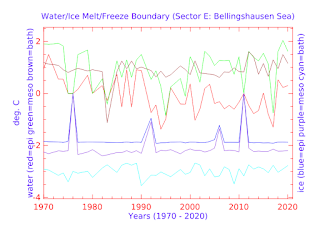 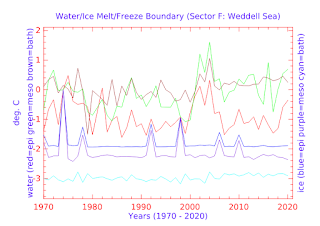 This is an appendix to: Quantum Oceanography - 7

The following graphs depict the graphs in Appendix IceMelt with the additional element of color fills. The two different colors enhance the location of temperature boundaries of the seawater and the glacial ice. The first graph identifies the two colors for "ICE" and "WATER".

The individual graphs are composed of data from Antarctica "Sectors" of the Southern Ocean. 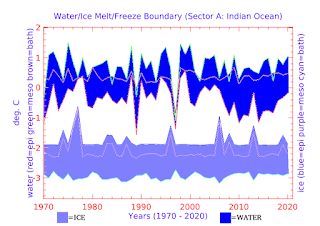 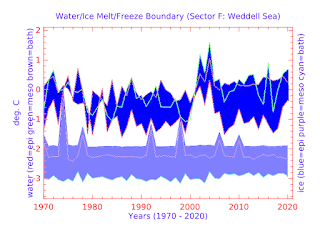 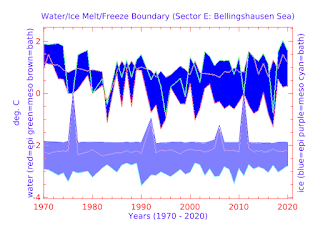 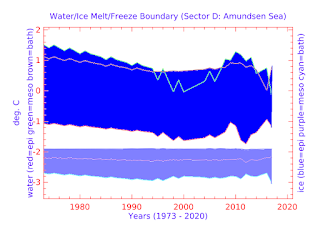 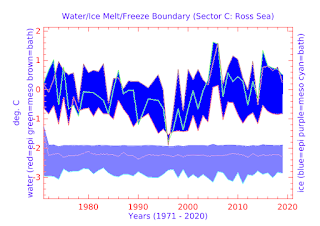 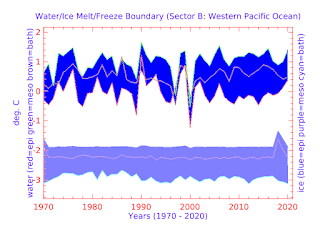 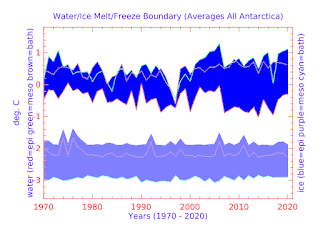