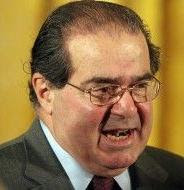 One of the Supremes who instilled us with Bush II in 2000 via the decision in the still infamous Bush v Gore case, scolded a student who asked him a question during a question and answer session.

Justice Scalia has often said of the Bush v Gore decision, "get over it", when asked about it, as if it was the stare decisis maximus case of all time.

It is as if he has no intellectual position on it, but says we must live with it and that is that. A case that should not be talked about in terms of a good or bad decision?

Thank you so much o supreme one for your gift of Bush II to the American people.

One that keeps on giving us pain and suffering to this very day.
Posted by Dredd at 7:56 AM