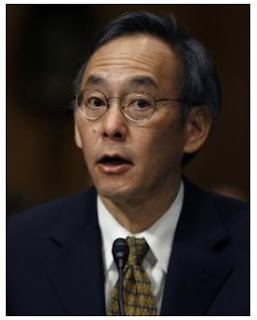 
Nobel laureate, and now Secretary of Energy, pulls no punches:


California's farms and vineyards could vanish by the end of the century, and its major cities could be in jeopardy, if Americans do not act to slow the advance of global warming ...

(LA Times, emphasis added). A Secretary of Energy that calls it like he sees it. He is not afraid to deal with "global warming is the greatest hoax ever" republican senators.

Do we need to be reminded that if we were to make a list including California as if it were a nation, along with actual nations, it would be in the top ten economies of the world in that list?

California is in dire straights to say the least. Some ask is California bankrupt? Now Dr. Chu says it is in danger of loosing its sources of income while others point out California's water crisis.

It is an emergency, and it is our problem. To be sure, as goes California so goes the United States, because it is the most populous state with the largest economy (compared to the other states).

If California is in that much trouble while the republicans in the congress manoeuvre to take the glory of these disasters instead of the blame and shame like they should, we may not recover as a nation.

The next post in this series is here.
Posted by Dredd at 7:33 AM