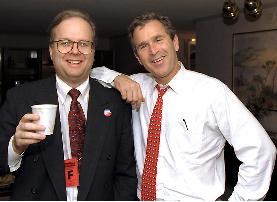 Karl "Moi?" Rove, under the umbrella of bushies, refused to testify before congress.

Two others who also refused have been issued contempt citations, but bushie AG Mukasey refused to prosecute them.

Obama is not in a mood to tolerate more and more blatant insubordination and law breaking nor is Obama Attorney General Eric Holder.

The Honorable John Conyers, chair of the House Judiciary committee, has just issued a subpoena to Rove. Rove is to testify in a deposition on Ground Hog Day (Feb 2).

We don't need Al Franken, there is already someone in congress with the senses of a comic.

Rove won't think it is funny, but he will talk either to congress or to cell mates. His choice.

And each morning Rove wakes up the same thing is going to play on the radio.