Throw The Textbook Out 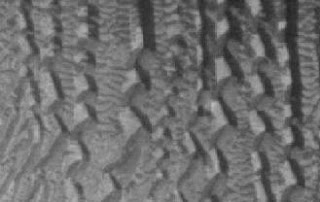 The planet Mars has water.

It is no longer said to have been a dead planet of deserts forever as once opined.

What were those channels that Lowell and Schiaparelli, two famous astronomers, saw in the 1800's?

A temporary global warming on Mars that went away? Not sure.

But there is growing evidence that liquid water is placed onto the surface via springs at times. And it has evidently happened many times in the past.

Mars has vast amounts of water, in the form of ice, at the poles. Enough to cover it 30 or so feet deep over its entire surface. It has glaciers under a cover of dust and rubble near the equator. And it once had more water. Much more, and it was liquid.

Methane gas has been discovered during massive releases of that gas at mid summer. Since methane dissipates quickly the release of that gas means that it may be being created now. Which is a possible sign of microbial activity, because microbes on earth produce methane.

And recently carbonates were discovered in rock layers which indicates that non-acidic water was there in large quantity in the past. Lotsa cool clean water a long time ago!

Was that before the planet was bombarded when the planet between Mars and Jupiter was destroyed? A prominent astronomer, who died a few weeks back, thought so. And I certainly do too.

All that is left of that planet now is vapor, asteroids, and chunks of it orbiting other planets or embedded in craters they made on planets and moons throughout the solar system.

The exploration machines on Mars and around Saturn are finding information that is causing headaches for the people who print the textbooks. The textbooks that tell us the great truths about our solar system.

Throw some more of the books out. They are out of date. We are finding strange goings on there.

And there are very strange discoveries on Saturn too.
Posted by Dredd at 11:54 PM