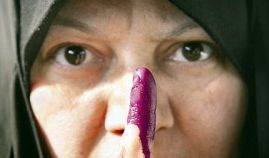 Today the often endangered people of Iraq will go through an election cycle.

They will cast their vote, get a purple finger, and return to their homes or jobs pondering their future and their past.

I followed the life of an Iraqi woman on her blog for a long time.

Before her output went cold in October of 2007 after she and her family had to flee Iraq along with millions of other Iraqis.

She noted many things about their "barbed wire elections" (At least eight of the 14,000 candidates have been killed in the run up to the election today).

She revealed, among many other things, that Iran had been harbouring many Shia outcasts. They had been expatriated by the Saddam Hussein regime of Iraq and were waiting their turn to leave Iran and return to power at home.

These Shia expatriates did it undetected to the bushies and in many cases right under the very long bushie noses. The bushies were doing a heckuva job in both Iraq and in Louisiana in the purple haze of those daze.

The Sunni population of Iraq was less than impressed with the bushie lack of performance, and to them, misguided focus on the Iraqi oil fields. I mean they even went so far as to think the invasion and occupation might be about drill baby drill. And so they mounted an insurrection. The bushies figured that out about four years later.

This election today in Iraq will probably hurt the feelings of those who feel elections are a magic panacea for democracy in the fertile crescent. Again. Somewhat like our own elections here in 2000 and 2004?

But this Iraqi election will be over before the ongoing election in Minnesota for the other US Senator is over. You see, Iraqi election officials are not soft on counting.

So is neoCon "democracy" fast and furious, steady as she goes, or just plain old willy nilly?
Posted by Dredd at 6:40 AM