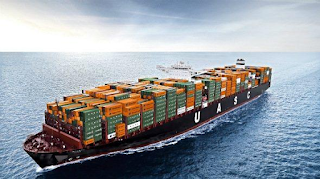 If you peruse the seaports of civilization (World Ports by Country), and if you are like me, you will become concerned about civilization's ability to change all of these seaports to adapt to changing sea levels and coastal storms.

To frame a metaphor like the government has done concerning fossil fuels ("Oil is the lifeblood of America’s economy"), we can say that seaports are, to the economy and existence of civilization, what organs like the heart, kidneys, and lungs are to the human body.

Humans without organs and lifeblood cease to exist, so if the seaports are impaired or inundated by global warming induced climate change (e.g. sea level change and coastal storm damage) then civilization as we know it will also cease to exist.

The single most important type of seaport trade is called "liner shipping" because it involves about sixty percent of global trade dynamics:


"Liner shipping could lay claim to being the world's first truly global industry. Likewise it could claim to be the industry which, more than any other makes it possible for a truly global economy to work. It connects countries, markets, businesses and people, allowing them to buy and sell goods on a scale not previously possible. And as consumers, we have become used to seeing goods from all parts of the globe readily available in the stores we visit.

But is this a good thing?

The reality is that the needs of a rapidly growing world population can only be met by transporting goods and resources between countries. The liner shipping industry has made this process more efficient and changed the shape of the world economy. This benefits consumers by creating choice, boosting economies and creating employment. Costs for the consumer are kept down and efficiencies are improved and this in turn minimizes impact on the environment as well.
Trade Statistics

The exchange of capital, goods and services across international borders is known as international trade and in many countries it represents a significant share of the nation's gross domestic product (GDP.) Liner ships transport approximately 60 percent of the value of seaborne trade or more than US $4 trillion worth of goods annually. Learn more about the volume of trade handled by the liner shipping industry."

Some countries will be more severely impacted than others will be when seaport based international sea trade is impacted:


"By volume, more than 95 percent of U.S. international trade moves through the nation's ports and harbors, with about 50 percent of these goods being hazardous materials."

(NOAA Ports). Truth be known we generally can't fathom the catastrophe that could happen caused by unabated SLC.

The data are also listed by WOD Zone.

The reason for these subdivisions is that sea level change (SLC) whether in the form of sea level fall (SLF) or sea level rise (SLR) has an impact upon seaports in the same area, so it is narrowed down to WOD Zone granularity.

The WOD records are not guesstimates they are historical records of in situ measurements made by research scientists, while the tide gauge records are official records typically done by local governments (PSMSL).

They show clearly that the difference in sea level change (SLC) from country to country or state to state can be significant.

The degree of SLR and SLF varies from place to place as well.

Furthermore, since ports can take a decade or decades to prepare for, construct or remodel, then implement, the requisite engineering must be done for anticipated future conditions.

It gives new meaning to "thinking ahead", because there is substantial variation in estimates for how much SLF or SLR will have taken place when the port is finally opened or reopened for business.

The psychology of peoples from different countries, religions, cultures will have to synchronize into a well orchestrated effort if all ports are to be brought up to the code to meet the conditions that are approaching.

Preparing a unified effort can't begin until after unification of purpose takes place.

Currently, the psychology does not allow for a unified effort (The Leadership Void for Climate Adaptation Planning).

Take a look at the tide gauge record SLC indications (history) that have been impacting seaports over time, and will be doing so even more in the future, then grasp the difficulty in making new ports or fixing old ones.

Future posts will expand upon these themes.

The next post in this series is here.
Posted by Dredd at 10:13 AM