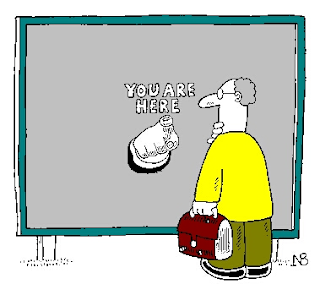 In the first post of this series I mentioned the psychological confusion generated by YAH ("you are here") maps.

I don't know about other mammals, but one big factor that throws people off in YAH scenarios is the "Y" ... the "you" ... the human.

We can never understand where WE are unless WE know what WE are.

Dredd Blog has been criticized ad nauseum over the years for explaining that so long as we don't know what a human is, we will continue to be disoriented in the context of YAH.

Today, I will use the space program that has been ongoing for years and years to illustrate the point.

Not only that, we also learned that the microbial cells in and on us keep us healthy and/or alive (see video and this).

Anyway, the space program was designed without our knowing the "Y" of "YAH."

So, how are we going to exist in space without 99% of ourselves?

Is that why our bones turn rubbery in space after awhile?

What microbes do we have to take with us, including backup systems, when we travel in space?

You ask yourself some similar questions now ... but watch the video and especially the Q&A following the lecture to give yourself ideas.

Dr. Bassler, in the video below, (watch it to find out some critical YAH information) explains that we have only very recently found out that the "Y" is not what we have though it was for a few thousand years (On The New Meaning of "Human", 2).

25:00 the language of bacteria has a basic word, with "carbons" (carbon atoms) added on to that basic molecule so as to make additional "words" used by different species of bacteria.

29:30 E. carotovora releases antibodies that it is immune to, so as to eradicate competition that are not immune to those antibodies.

39:00 many, if not all, bacteria use a word known by all bacteria, when communicating with other species of bacteria different from their own species.

57:25 Q&A session ... why did we just find this out 400 years after microbes were discovered using the first microscopes? "hubris ... snobbery ... dogma that only higher species have language, etc."