How To Identify The Despotic Minority - 2 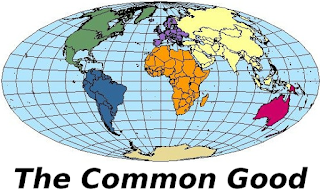 The first post in this series identified the hate of the press as a "DNA  marker" of the despotic minority (How To Identify The Despotic Minority).

The second "DNA marker" I want to point out today is the hate of the common good.

Those enemies have a basic narcissistic personality disorder that prevents them from having sufficient care for the welfare of others.

In our modern times this problematic reality has engendered the realm of psychology and a discipline that has labored to understand and treat it (Narcissistic Personality Disorder).

That is beneficial because hatred of the common good is not something to toy around with.

Historically, the despotic minority has metastasized into the greatest enemy of the common good:


A despotic minority is an alien ideology within a free constitutional society.

(How To Identify The Despotic Minority). In the U.S.eh? the common good is now slanderously and pejoratively called "socialism" by the despotic minority.

The term "socialism" has been ideologically poisoned by members of the despotic minority in order to serve their own selfish purposes (No, governor, the common good is not ...).

In healthy societies, the common good has a good reputation:


"In ordinary political discourse, the “common good” refers to those facilities—whether material, cultural or institutional—that the members of a community provide to all members in order to fulfill a relational obligation they all have to care for certain interests that they have in common. Some canonical examples of the common good in a modern liberal democracy include: the road system; public parks; police protection and public safety; courts and the judicial system; public schools; museums and cultural institutions; public transportation; civil liberties, such as the freedom of speech and the freedom of association; the system of property; clean air and clean water; and national defense. The term itself may refer either to the interests that members have in common or to the facilities that serve common interests. For example, people may say, “the new public library will serve the common good” or “the public library is part of the common good”.

As a philosophical concept, the common good is best understood as part of an encompassing model for practical reasoning among the members of a political community. The model takes for granted that citizens stand in a “political” or “civic” relationship with one another and that this relationship requires them to create and maintain certain facilities on the grounds that these facilities serve certain common interests. The relevant facilities and interests together constitute the common good and serve as a shared standpoint for political deliberation. When citizens face various questions about legislation, public policy or social responsibility, they resolve these questions by appeal to a conception of the relevant facilities and the relevant interests. That is, they argue about what facilities have a special claim on their attention, how they should expand, contract or maintain existing facilities, and what facilities they should design and build in the future.

The common good is an important concept in political philosophy because it plays a central role in philosophical reflection about the public and private dimensions of social life."

(Stanford Encyclopedia of Philosophy, emphasis added). Another name for the common good is "the general welfare" as quoted in the Preamble.

When government loses the concept of the common good it begins a trek on the long road of degeneracy, and fosters the metastasizing of the despotic minority.

The despotic minority infects a number of citizens until the point is reached when history repeats itself:

(A Study of History, by Arnold J. Toynbee). One of the final series of suicidal events on the downward spiral is the loss of freedom due to the trance of militarism ("No nation could preserve its freedom in the midst of continual warfare" - James Madison).