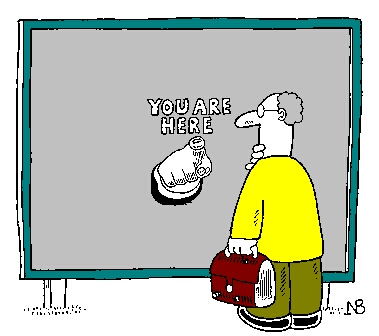 I have mentioned the interesting phenomenon of "you are here" directives on Zoo maps that visitors are given at the Entrance Area to some large Metropolitan Zoos.

On one post some humor was generated by the story about how a certain Senator became confused by the map that the Zoo handed out.

He became confused because as he moved around the Zoo (noticing the map from time to time) he became certain that he had moved upon occasion since he had last looked at the map ... but ... to him the map was still indicating that he was still at the entrance of the Zoo (Has The Navy Fallen For The Greatest Hoax?).

There is a more serious side to the reality of where we are, where you are, and where I am.

Possibly the most interesting aspect of "you are here" is that we are all in the same place!

As the song says, "We all live under the same Sun" (Exploding Plastic: Inevitable, see video).

This "you are here" phenomenon even has psychological ramifications that have been written about in scientific journals:


One of the most robust and reliable demonstrations in spatial cognition (environmental, geographic, cartographic, etc., cognition) is the difficulty that results for most people when they use a misaligned you-are-here (YAH) 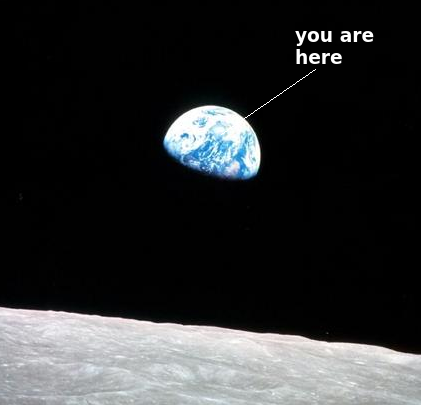 map to wayfind—to orient themselves to the proximal and distal surrounds in order to follow a route to a destination. This difficulty is called an alignment effect. YAH maps are reference maps—general-purpose maps meant to show features in the environment—that are typically rather large scale (i.e., show small areas of the environment) and are placed within the surrounding area they depict. They nearly always include an arrow or some other symbol representing the location and perhaps the heading of a person viewing the map (Klippel, Freksa, & Winter [2006] use the term complex for YAH symbols indicating both location and heading). That is, all YAH maps are in situ in that they represent the area where they are placed. Because they are intended to solve wayfinding problems for a person actively engaged in applying that solution to get somewhere in real time, they must be coordinated with the surrounds when used.

(YAH, emphasis added). One psychologist even made a list of suggestions that were designed to help eradicate the YAH confusion:


You-are-here maps are standard aids for newcomers to a complex terrain. A precisely constructed map with a properly affixed you-are-here symbol, however, is not sufficient. Two principles, one of structure matching and one of orientation, must be considered in order to maximize the map's usefulness. Indeed, neglect of these can make the map misleading. These principles lead to the following set of recommendations: (1) provide salient, coordinate labels in both the terrain and the map; (2) place the map near an asymmetrical part of the terrain; (3) design the you-are-here symbol to indicate map-terrain correspondence; (4) align the map with the terrain; (5) be redundant, that is, use as many of these supplements as possible.

(You-Are-Here Maps: Psychological Considerations, emphasis added). In my opinion the relevant psychology only becomes germane to all of civilization when "you are here" applies to our place in the cosmos.

We live on the planet Earth, which seems to be confusing to some of us who have not figured out "you are here" yet.

I say that in the sense of where one is most often determines how one should behave a la "when in Rome do as the Romans."

When on Earth, do as a competent cosmic adult Earthling would do!

The psychological aspect of being lost in space on a planet we do not know enough about really is a frightening concept.

Yet there is no valid reason that our species should be endangered as we endanger all the other species still living with us, and in fact that is a violation of the map we have been given (The Tenets of Ecocosmology, I am the Highway).

Nevertheless, the fact is that we make about 200 species extinct each day as we move closer and closer to our own extinction (Will We Destroy Food - The Bees? - 2).

So, why are we here?