Flood Of Prosecutions A Cover Up? 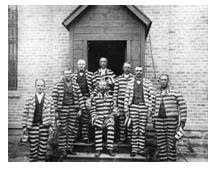 We are told that a flood of prosecutions may be coming for those who have done financial wrongs which led to our current financial demise.

I hope I am not being paranoid for worrying about whether those prosecutions will become cover ups or become place holders for some of the other serious crimes that have outraged the public.

Do we want that type of pacifier which lets the warsters off the hook while going after only the banksters?

Crimes like lying to us about practically everything, wrong wars, missing war money, torture, Plame outing, destroying evidence, politicization of the DOJ, obstruction of justice, secret rendition, and contempt of congress, to name a few.

Oh, I know that "the economy is fundamentally sound" types of fraud and deceit should be prosecuted too.

Every country has an economy, even China and Darfur, however the greatest value we have is our American constitutional way of life.

We must protect it with a signal to despots here that they will be prosecuted for those types of crimes too.
Posted by Dredd at 9:26 AM