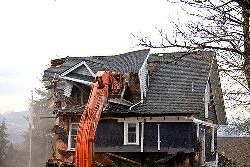 You have done nothing negative to your house for years.

But your equity in it, what you use as a measure of what you are financially worth, is being taken away from you daily. As a matter of fact, one shocking article says it this way:


The net worth of American households fell by the largest amount in more than a half-century of record keeping during the fourth quarter of last year.

The Federal Reserve said Thursday that household net worth dropped by a record 9 percent from the level in the third quarter.

The decline was the sixth straight quarterly drop in net worth and underscored the battering that U.S. families are undergoing in the midst of a steep recession with unemployment surging and the value of their homes and investments plunging.

(NY Times). Who is taking this equity, value, wealth, and worth from you?

If it was the government, it might violate the US Constitution's Fifth Amendment which is an injunction against violations of your property rights.

That amendment says "nor shall private property be taken for public use, without just compensation". When it is taken without an official declaration that is what is called inverse condemnation.

This current form of "taking your property" is just as real as if they build a garbage dump in the lot adjacent to your property.

The loss is just as real but there seems to be no just compensation to this current insidious mess.

We have suggested here and here some remedy that we feel could, if properly and carefully developed over time, bring more security and safety to our economy.
Posted by Dredd at 12:55 PM