The Doctrine of The Holocaust 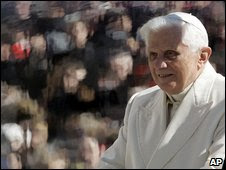 The Pope is said to have ordered a bishop to recant of his views on the holocaust.

In a recent article we pointed out how some of the criticism of the catholic church by those who see themselves as progressives had missed the fact that a pardoned bishop was a bishop who said there was no holocaust.

We saw that blog's consistent harangue against "zionism" as the reason it often overlooked the big picture.

Evidently we were correct to see it as a big deal, because the Pope has intimated that if he had known of the bishop's holocaust statements he would not have pardoned him.

Instead the Pope ordered the bishop to unambiguously recant from the position that there was no holocaust.
Posted by Dredd at 3:56 PM