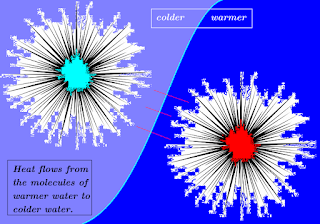 In today's post I want to continue consideration of the benefit of applying quantum physics to a popular topic these days, which is "ocean heat content" (In Search Of Ocean Heat, 2, 3, 4, 5, 6, 7, 8).

The gist of it is that infrared photons make up what oceanographers call "potential enthalpy", which is another way of saying "ocean heat".

Let's review that concept in its most modern form:


"The quest in this work is to derive a variable that is conservative, independent of adiabatic changes in pressure, and whose conservation equation is the oceanic version of the first law of thermodynamics. That is, we seek a variable whose advection and diffusion can be interpreted as the advection and diffusion of ‘heat.’ In other words, we seek to answer the question, ‘what is heat’ in the ocean?
...

The variable that is currently used for this purpose in ocean models is potential temperature referenced to the sea surface, θ, but it does not accurately represent the conservation of heat because of (i) the variation of specific heat with salinity and (ii) the dependence of the total differential of enthalpy on variations of salinity.
...
For example, an increase in pressure of 107 Pa (1000 dbar), without exchange of heat or salt, causes a change in enthalpy that is equivalent to about 2.5ЊC. We show in this paper that in contrast to enthalpy, potential enthalpy does have the desired properties to embody the meaning of the first law.
...
Present treatment of oceanic heat fluxes is clearly inconsistent. Ocean models treat potential temperature as a conservative variable and calculate the heat flux across oceanic sections using a constant value of heat capacity. By contrast, heat flux through sections of observed data is often calculated using a variable specific heat multiplying the flux of potential temperature per unit area (Bryan 1962; Macdonald et al. 1994; Saunders 1995; Bacon and Fofonoff 1996). Here it is shown that the theoretical justification of this second approach is flawed on three counts. While the errors involved are small, it is clearly less than satisfactory to have conflicting practices in the observational and modeling parts of physical oceanography, particularly as an accurate and convenient solution can be found.
...
it is perfectly valid to talk of potential enthalpy, h0, as the 'heat content' ...”

(In Search Of Ocean Heat, quoting McDougal 2003). That Dredd Blog post which used Dr. McDougal's 2003 published paper, discussed the TEOS-10 functions for deriving the quantity of potential enthalpy in a kilogram of seawater.

I have taken it further in more recent posts, in the sense of identifying the main component of potential enthalpy as photons, the quanta of electromagnetic radiation, at their infrared energy level.

This way of looking at it transcends the limited notions of ocean heat transfer by noting that electromagnetic radiation obeys the laws of thermodynamics in that "hot flows spontaneously to cold", and that photons in such a flow can travel through space ... from atom to atom or molecule to molecule.

Thus, the natural lack of constraint on photon flow is overlooked, so that the ease in which ocean heat can move through seawater isn't adequately considered.

That heat movement is historically attributed to ocean water currents rather than the radiation of photons (spontaneous photon currents).

That historical hang-up may be a factor in the continual "worse than previously thought" statements we see in news reports, which establishment science's overly conservative estimates of glacial melting tend to produce.

In times past I have blogged about the thermal proportions shown in the matching patterns of the TEOS-10 constructs, such as Conservative Temperature and potential enthalpy.

In other words I have hypothesized that they have the same "genes" if you will (meaning they are composed of photon energy).

The graphs in many posts here on Dredd Blog have pointed out those thermodynamic structural patterns (e.g. In Search Of Ocean Heat - 8).

I did those graphs "back in the day" with SciDavis software.

To do that with SciDavis software required four-pane graphs which do not adequately render or expose the intensity of those thermodynamic structural similarities.

So, today I have produced some graphs that really scream out the intensity of the thermodynamic likeness between photons and Conservative Temperature.

To fully do so I had to emulate a kind of "Revised Local Reference (RLR)" like the folks over at the "Permanent Service for Mean Sea Level (PSMSL)" have done.

It is a way to take a close look at things with orders of magnitude of difference and sameness ... by isolating the sameness.

The two appendices today (Appendix A, html tables and Appendix B, graphs) are a step in that direction.

The HTML tables have the actual values of in situ measurements taken from the WOD and SOCCOM, averaged, then placed in my SQL server.

I use the Conservative Temperature (CT) and photon moles column at three depths shown in the HTML tables (Appendix A).

The result of the "RLR-like" technique is that the two lines (one CT the other CT+MOL) are only a very small distance apart making it easy to see how closely the "thermodynamic pattern" of the one matches with the other.

This is done for each of the three depths (Epipelagic, Mesopelagic, and Bathypelagic depth levels) that are relevant along the grounding line of Antarctica's Tidewater Glaciers.