The Surge Of Snap Sergeants 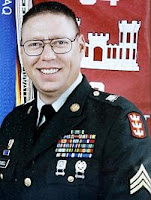 When Bill Gates and Colin Powell are morphed into one savy sergeant by military doctrine, then sent to strange war zones which their nation does not support, they are going to suffer internal damage.

One sergeant did not make it long enough to return from Iraq because he snapped at the door of the mental treatment clinic.

In a bizarre form of "friendly fire" he took out 5 or so other soldiers also suffering from what James Madison called our worst enemy.

One of the sergeant's fellow soldiers, the commander in Afghanistan, was recently removed for covering up "friendly fire" and using that murder for propaganda purposes instead.

It is time we relocated these men to the true America, time we gave them liberal amounts of treatment, and time we have them stay home a long time.
Posted by Dredd at 11:12 AM