When There's Nothing Right Left To Do 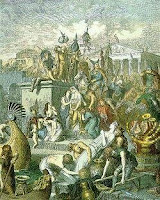 The evolution of partisan crime is emerging as the retrograde age settles upon us.

Our concept of law that crime is not a political issue is fading as our nation morphs into infamy.

The republican senators in a senate hearing yesterday expressed the opinion, mantra style, that prosecution of war crimes is something the democrats thought up as a political stunt.

If members of the Bush II regime flagrantly violated our law, contained in treaties we faithfully signed, it is partisan, Sen. Graham contends, to want to prosecute them for those crimes.

What is next, apportioning crime in liberal or conservative columns? Crime is a partisan notion?

These types of debates, with the world looking on, show how wise James Madison and other of our forefathers were.

They warned of the tyranny and poison of war; we have ignored their wisdom and sought swill instead, and we have reaped the whirlwind of fools as punishment:

Of all the enemies of true liberty, war is, perhaps, the most to be dreaded, because it comprises and develops the germ of every other.

War is the parent of armies; from these proceed debts and taxes; and armies, and debts, and taxes are the known instruments for bringing the many under the domination of the few.

In war, too, the discretionary power of the Executive is extended; its influence in dealing out offices, honors and emoluments is multiplied; and all the means of seducing the minds, are added to those of subduing the force, of the people.

The same malignant aspect in republicanism may be traced in the inequality of fortunes, and the opportunities of fraud, growing out of a state of war, and in the degeneracy of manner and of morals, engendered in both.

No nation can preserve its freedom in the midst of continual warfare.

War is in fact the true nurse of executive aggrandizement. In war, a physical force is to be created; and it is the executive will, which is to direct it.

The strongest passions and most dangerous weaknesses of the human breast; ambition, avarice, vanity, the honorable or venal love of fame, are all in conspiracy against the desire and duty of peace.

(James Madison, 4th President, Bill of Rights author, Congressman, Cabinet Member, also called the "Father of the U.S. Constitution"; above quote is from his "Political Observations," April 20, 1795, in Letters and Other Writings of James Madison, Volume IV, page 491, emphasis added).

A contemporary artist has some verbal imagery which might apply to the Roman Empire and to the U.S. Empire:

Ring them bells St. Catherine
From the top of the room,
Ring them from the fortress
For the lilies that bloom.
Oh the lines are long
And the fighting is strong
And they're breaking down the distance
Between right and wrong.

Maureen Dowd has the gift of the golden tongue on this matter.
Posted by Dredd at 7:56 AM