Glitter Of Peace In The Dirty Business 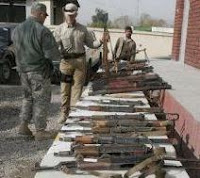 What has come of us when peace is a dirty hippy business and war is a holy no guts no glory business?

When one wonders what is meant by the statement:

The leader of the militant Palestinian group Hamas said Monday that its fighters had stopped firing rockets at Israel for now. He also reached out in a limited way to the Obama administration and others in the West, saying the movement was seeking a state only in the areas Israel won in 1967.