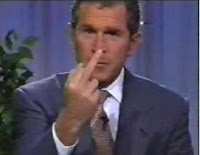 This question was posed to the fox: "what is that on your lips", to which the fox said "what chicken feathers".

The Department of Just Us Resurrected has completed a five year report following an investigation of itself, even though the law says "no man can decide his own case".

The question posed was "how has the fox been doing in the hen house ... or has anyone been torturing anyone?"

The fox report came out not recommending any prosecution for the crimes of those who wrote America's Shame Memos.

A real investigative journalist, not one of the foxes, Mr. John Sifton, has completed a five year investigation on behalf of the people, and he nails the criminal foxes.

• An estimated 100 detainees have died during interrogations, some proven to be tortured to death.

• The Bush Justice Department refused to investigate and prosecute alleged murders even when the CIA inspector general referred a case.

• Sifton’s request for specific information on cases was rebuffed by the Bush Justice Department, though it was “familiar with the cases.”

• Attorney General Eric Holder must now decide whether to investigate and prosecute homicides, not just cases of torture.

(The Daily Beast, emphasis added). So now AG Holder has to decide what to do about what everyone already knows, and what is anything but secret.

Under U.S. Criminal Law the penalty for torturing anyone to death is the death penalty. That same law gives 20 years to those who conspire with the murderers.

Is he going to ask a grand jury and a criminal petite jury decide guilt or innocence, as our U.S. Constitution provides, or is he going to say "what chicken feathers?"
Posted by Dredd at 7:39 AM