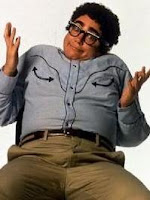 Morning Yo Yo (a.k.a. Morning Joe on MSNBC) was at it again today.

Meeker, Mike Barn Oracle, and Jonathan OutCaper were showing they had neither gone to logic nor civics classes. At least in this century.

They are on tape and on record saying that presidential candidates do not know what they are talking about during an election.

Those candidates just make promises they can't keep because what they really need to know to be informed candidates is classified and hidden from everyone.

Those candidates who tell the best story find out the real stuff about the world only when they take office and read the classified reports and documents. Then wham, bam, reality strikes and they become The Decider.

Meeker, Mike Barn Oracle, and Jonathan OutCaper did not realize they were saying that if presidential candidates just make up a good story and then we vote on the best story teller, then we have no democracy, we have American Idol.

We have a "best story" contest, then when the one with the best story gets in and finds out what it is really like, then we like what they do or we don't.

Are these people, who like to call themselves journalists, seriously that stupid?

Meeker, Mike Barn Oracle, and Jonathan OutCaper actually think what we should vote for as a valid democracy is classified? That we have no choices about what goes on behind the scenes, what really matters?

Assuming that candidates are not already corrupt and are really sincere and honest people, the reality of our tradition is that people who enter power become corrupted by it "unless".

On the other hand they may become blackmailed by certain "intelligence" operations or other will suppressors that have been institutionalized into our society.

Willy Geist was wise enough to keep his mouth shut during the jerk-a-thon and so no comment on him.
Posted by Dredd at 6:29 AM