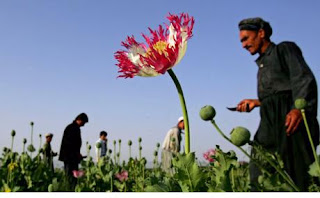 The winter of poppy cultivation had come to Afghanistan shortly before 2001.

On October 7, 2001, military strikes against Afghanistan were launched by the United States and an international coalition that included Great Britain, Canada, Australia, Germany and France.

The poppy cultivation had been almost completely removed from Afghan culture by the time that the invasion took place.

By 2006 Afghanistan was leading the world in poppy cultivation once again:


U.N. figures to be released in September are expected to show that Afghanistan's poppy production has risen up to 15 percent since 2006 and that the country now accounts for 95 percent of the world's crop, 3 percentage points more than last year, officials familiar with preliminary statistics told The Associated Press.

(Washington Post). An increase in heroin addiction and drug wars was the inevitable result.
Posted by Dredd at 5:39 AM