Out On The False Front 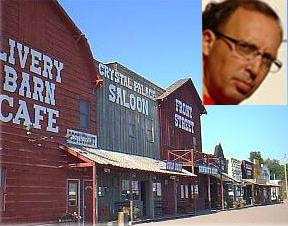 We who are students of Noam Chomsky are always wondering whether the news we are fed is legit or just more propaganda as usual.

In that light, several stories are worth considering and worthy of serious consideration.

One of the stories which deserves praise pins AIG woes on Joseph Cassano:


He was a political science major, Class of 1977, and he seemed to be on the way to do his borough proud when he went to work on Wall Street.

He instead gave new meaning to a saying among Brooklyn crooks who forayed into Manhattan during his father's tenure as a cop.

"Manhattan make it and Brooklyn take it."

Joseph Cassano started out at Drexel Burnham Lambert under Michael Milken, "the Junk Bond King." Drexel imploded in 1990 and Milken landed in prison.

AIG promptly hired a team of Drexel people to start a Financial Products unit, Cassano among them. Cassano became the head and began dealing in securities known as "credit default swaps" out of one office in Wilton, Conn., and another in England, dubbed "the London casino."

The cop's kid jetted between a house in Westport, Conn., and an $8 million townhouse in London that AIG provided.

(Daily News, 3/17/09, emphasis added). We have written recently about how criminality is getting into high places habitually.

And we have suggested that we rethink some of our national practices and become more unafraid to prosecute international white collar crime.

Here are more links and quotes about Joseph J. Cassano:


The insurance giant’s London unit was known as A.I.G. Financial Products, or A.I.G.F.P. It was run with almost complete autonomy, and with an iron hand, by Joseph J. Cassano, according to current and former A.I.G. employees.

A onetime executive with Drexel Burnham Lambert — the investment bank made famous in the 1980s by the junk bond king Michael R. Milken, who later pleaded guilty to six felony charges — Mr. Cassano helped start the London unit in 1987.

The unit became profitable enough that analysts considered Mr. Cassano a dark horse candidate to succeed Maurice R. Greenberg, the longtime chief executive who shaped A.I.G. in his own image until he was ousted amid an accounting scandal three years ago.


One of the many fascinating sidebars in the decline and fall of the AIG empire is the saga of Joe Cassano. He was the genius behind AIG's Financial Products Unit, which insured high risk sub-prime mortgage deals. In other words, he is the man most responsible for AIG's abrupt demise.

(Workers Comp Insider, 10/8/08). The big dose of poison was taken in 2005, when AIG became unhedged and therefore unhinged:


Blame former AIG executive Joseph Cassano--and the lack of oversight by AIG's senior executives and board of directors--for blowing up the largest insurance company in the world.

How'd they do it? The answer is clearly spelled out in the footnotes to AIG's (nyse: AIG - news - people ) 2007 consolidated financial statement. "In most cases AIGFP (American International Group Financial Products) does not hedge its exposures related to credit default swaps it has written."

By the close of 2007, AIG held $562 billion risky and dangerous unhedged credit default swap (CDS) contracts on its books. That amounted to more than half of all AIG's assets. AIGFP, managed by Joseph Cassano, until he was pushed out in early 2008, was the dangerous operation singled out by The New York Times Sunday as the "small, freewheeling unit" that "brought AIG to its knees."

Croesus was informed Saturday that these complex contracts were hedged until former Chairman Hank Greenberg was ousted from his post in April 2005.

His name is not on TV, nor has the congress mentioned the name. Everyone is bad mouthing Liddy and Geitner.

Check out Banque AIG and follow it to Switzerland.

Therefore we must ask why is it being covered up?
Posted by Dredd at 8:22 AM