Stockholm Syndrome vs. The Ecosystem - 3 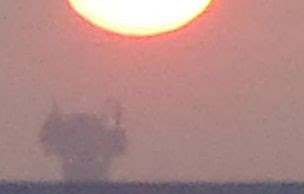 In the previous episode of this series we discussed the court order lifting the Obama Administration's hold on any more deep water drilling in the Gulf of Mexico.

Across the internet some bloggers were advocating that judges hearing the cases should recuse themselves because they had a financial interest in the litigation seeing as how they owned stock, bonds, or were past employees of defendants or plaintiffs in the cases.

The government, in the Hornbeck case, did not even ask the judge hearing the case to recuse himself even though he had "financial interests" in some of the plaintiffs, and even though Brad Blog's Ernest Canning, who takes one of the more extreme positions, was calling for his impeachment (removal as a federal judge).

Some federal appellate judges have not seen it the way Brad Blog's Earnest Canning sees it either.

Canning wanted impeachment of the district judge, but the flavor of the Fifth Circuit Court of Appeals, in a recent ruling, seems to differ with that perspective:

Following the tragic explosion at the Deepwater Horizon oil rig, numerous lawsuits have been filed in the Eastern District of Louisiana. Because a number of the federal district court judges in that District have recused themselves, many of these cases have been assigned to Judge Barbier (over forty at present). When the first Deepwater Horizon cases were assigned to Judge Barbier, he owned debt instruments issued by Halliburton and Transocean, two of the defendants in the instant proceedings. Judge Barbier instructed his broker to sell the debt instruments on June 2, 2010. Judge Barbier stated on the record on June 4, 2010, that he was unaware that he owned the debt instruments until reports surfaced in the media, and that, though not required, he thought divestment the best policy to avoid the appearance of bias.

Notwithstanding the divestment, Petitioners moved to have Judge Barbier recuse himself from the proceedings based on 28 U.S.C. § 455(b), the federal recusal statute. Petitioners argued that the debt instruments were “financial interests” under the terms of the statute, and that, accordingly, recusal was mandatory. Judge Barbier orally denied their motion ...

In sum, because we find no error in the district court’s conclusion that the debt instruments do not qualify as “financial interests . . . in a party to the proceeding,” petitions for writ of mandamus are DENIED.

(In Re Deepwater Horizon Litigation, emphasis added). It would be good to take this case to the Supreme Court now, prior to letting the district judge sit on the case, then having the Fifth Circuit Appellate Court reversed later by the Supreme Court, which would send the case back to square one years from now.

Perhaps the litigation will now simply move on "to the merits"; in other words throw the oil companies to the lions (the jury)?
Posted by Dredd at 7:16 AM