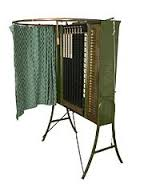 As long time readers know, we have been dabbling in the subject of "election integrity" in Dredd Blog posts a time or two in the past.

If you care to look into a brief history of "election integrity", you can check out some of those posts here, here, and here.

But the story today is that now a new era of "election integrity" is emerging in this nation.

For example, a Tennessee election official was found dead in the trunk of his car that was burning along side the road:


A Monroe County election official says the chairman of the local election commission has been found dead after his car was discovered burning.

James R. Brown, the election administrator for the county, said Monday that the body of Monroe County Election Commission Chairman Jim Miller was discovered by firefighters after they extinguished the blaze on Saturday night.

(Fox News). Stay tuned and we will keep you informed on the "who dunnit" series (e.g. "Did ACORN or The New Black Panthers do it?").

But be forewarned, we will also tie it in to MOMCOM and her complex, if you know what we mean.
Posted by Dredd at 1:06 PM