Silvio, Silver, & The Crystals of Mystery 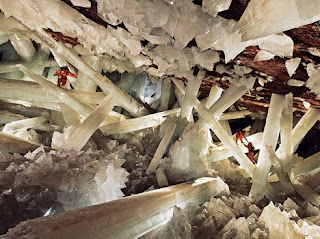 The photo was taken in a cave in Mexico, where the largest crystals in the world, so far, were accidentally found in 2000. Three men are also visible in the photo at about 10 o'clock (one man), and at 4 o'clock (two men).

They are the reddish, small entities crawling around on the massive crystals, one of which appears to be about the size of the Washington Monument in D.C.

The owners of the silver mine are scheduled to let the cave fill back up with water, and we shall lose the crystals it seems.

One wonders why the government of Mexico does not turn this into a scientific and tourist sight for the benefit of humanity?

Could the crystals be a source for energy or power, how and when did they form, or are there more?

Like Silvio in the Bob Dylan song, don't these people realize that silver won't buy back the beat of a heart grown cold to the wonders of the planet?