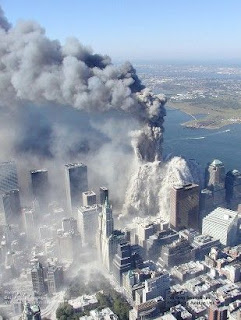 Many have been critical of the U.S. main stream media (MSM) for being afraid to report, in an unbiased manner, on what is called by many "the Truther movement".

We posted about the world press not having the same opinion as the U.S. press.

They have been respectfully reporting on the Truther movement instead of trashing them as the MSM in the U.S. has done.

Now there may be a crack in the groupspeak or newsspeak here in the U.S., because The Washington Times, said to be right leaning, has reported on national 9/11 news releases.

Their reporting is unbiased, just the facts ma'am, standard journalism:

A lingering technical question about the Sept. 11 terrorist attacks still haunts some, and it has political implications: How did 200,000 tons of steel disintegrate and drop in 11 seconds? A thousand architects and engineers want to know, and are calling on Congress to

order a new investigation into the destruction of the Twin Towers and Building 7 at the World Trade Center.

"In order to bring down this kind of mass in such a short period of time, the material must have been artificially, exploded outwards," says Richard Gage, a San Francisco architect and founder of the nonprofit Architects & Engineers for 9/11 Truth.

(The Washington Times). There was a national press release by Truthers a few days back, and the Times is one, and maybe the only one, of the larger papers to cover it.

It is also reported that The Jersey Girls have come out in open support for the Architects.

They are the ones who lost loved ones on 9/11 then petitioned for a long time against the Bush II regime's resistance to doing any 9/11 Commission investigation in the first place.
Posted by Dredd at 10:05 AM

Email ThisBlogThis!Share to TwitterShare to FacebookShare to Pinterest
Labels: 9/11, journalism