An Ocean Of Governmental Awareness 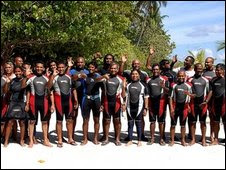 The government of the Maldives is alive and well, even as the ocean they worry about is not so healthy:


The government of the Maldives has held a cabinet meeting underwater to highlight the threat of global warming to the low-lying Indian Ocean nation.

President Mohamed Nasheed and his cabinet signed a document calling for global cuts in carbon emissions.

Ministers spent half an hour on the sea bed, communicating with white boards and hand signals.

The president said the UN climate change conference in Copenhagen this December cannot be allowed to fail.

At a later press conference while still in the water, President Nasheed was asked what would happen if the summit fails. "We are going to die," he replied.

(BBC News). The Ecocosmology blog has a post detailing a very recent scientific paper which shows that the Maldives officials are saavy.

Will the governments of the larger nations get it, or are they too corrupt?
Posted by Dredd at 7:23 AM