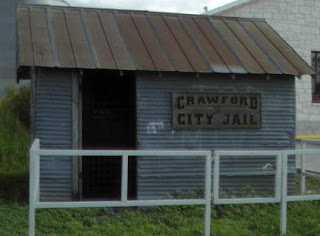 There are rumors that a defendant or two in Texas survive their trials and actually make it to jail.

There was a time in Texas history when this was less likely to happen:

A fight occurred in the District Court room last night which came near resulting fatally. The trial of young Stephens, charged with the murder of Dr. Wallace, at Mansfield, this county, had just been opened, the entire day having been spent in impaneling a jury.

The Attorneys were tired and petulant. Henry Furman, the leading counsel for the defense, became embroiled in a controversy with County Attorney Bowlin, and the two men finally came to blows. Every one expected to see bloodshed. The court room was quickly emptied. Both men were undoubtedly armed each waiting for the other to draw.

In the midst of this confusion Judge Becman leaped from the bench into the arena. As he did so Lawyer Weare, who is associated with Bowlin in the prosecution, excitedly struck the Judge a very severe blow under the ear. The Judge was dazed for an instant, but, being a powerful man, instantly recovered his balance and let fall a sledge-hammer blow that prostrated Lawyer Weare.

Turning his attention to the principal combatants, who by this time had clinched and were committing mayhem upon one another's ears and cheeks, the Judge commanded the jury to arise and quell the riot; at the same time he seized one of the combatants and two jurymen took hold of the other, thus separating them.

Furman and Bowlin were fined $50 each for contempt, after which the court immediately adjourned as all the combatants were bleeding profusely. The court did not fine Lawyer Weare. It is feared the feeling engendered will yet result in a tragedy.

(NY Times). The Crawford jail, unlike the Birmingham jail, could only handle the few, the proud, the good ole boyz.

The Birmingham jail, which housed people seeking rights about which children today would say "duh" (if you asked them if blacks and whites can use the same bathroom), is a much larger facility.

The Birmingham jail was full of those who thought "white only" and "black only" drinking fountains was "duh".

The Crawford jail, small as it is, will probably never seen any inmates who lied to the U.S. public, killed hundreds of thousands, tortured, ruined the DOJ, and finally ruined the economy.

That is because it is the land of the free and home of the brave, and because somebody forgot to consider home of the just in that mantra.

Have you come a long way baby, or are you still in Crawford Birmingham jail?
Posted by Dredd at 9:44 AM