Get Back Joe Joe, Get Back Loretta 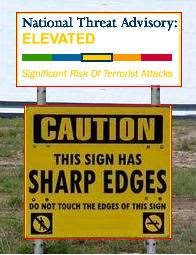 We hypothesized in a post here that a daze had set in during the Bush II years that was not limited to the bushies, but that it was a widespread daze.

The Government Accounting Office (GAO) has proven the case conclusively.

The GAO has shown that if terrorists were real and wanted to do serious damage in the U.S.A., it would be really be a piece of cake to accomplish:


It only took 27 seconds for him to smuggle live bomb components through security detail in a federal building. Later, he assembled a bomb in the restroom, and then walked around the facility undetected.

Investigators from the the Government Accountability Office, Congress' investigative arm, were able to penetrate all 10 of the undisclosed federal buildings it tested across the United States.

(ABC News). It is time to shake the fairy tale about the monster under the bed and rejoice that, like WMD in Iraq, the scary "turrisssstsss are everywhere" movie was only a self induced nightmare.

It is good that the world is not out to get us, but instead is out to get us to stop torture, indefinite prison for detainees, invasions, and occupations while we claim to be the true source of democracy on this planet.

The world and most Americans know we have slipped up and that it is time we admitted it fully; and time we remember to "get back to where you once belonged" as the Beatles song lyrics counsel.