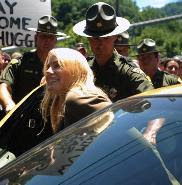 The scientist being arrested in the photo probably wonders who thought up the idea of the federal science police:

Each year, the U.S. Office of Research Integrity (ORI) investigates dozens of charges of scientific misconduct. And each year, the ORI adds a handful of names to a list of researchers found guilty of falsifying figures, fabricating data, or committing other academic infractions. As of April 1, 2009, this Administrative Actions list, presented on the ORI Web site, carried 38 names. These people are barred from receiving federal funds and/or serving on a Public Health Service committee, typically for a period of 3–5 years. Once the debarment term is up, the name disappears from the list. In theory, the punishment—and the shame — of the ordeal is over.

(The Scientist, Life After Fraud). Yet the reality is that these scientists who stuff their test tubes are treated like sex offenders:

But even then, the stain of guilt can pursue them through every aspect of their life, professional and personal.This is surely not the intention. Any system of justice worthy of the name must mete out the applicable punishment alongside opportunities for rehabilitation and measures of crime prevention.

(The Scientist, Fairness For Fraudsters). Gosh golly gee, sex guy and the science guy being put on lists, like terrorists? Whoa!

Dredd Blog has complained about the expanding universe in a tongue and cheek post, however, we did not mean to push Uncle Sam And The Pharoahs over the edge into Wooly Bully land and into ever expanding lists.

Wikipedia has an article on the Office of Research Integrity which focuses on scientific misconduct.

Does anyone else worry that this type of government office could become a political football to push or prevent certain scientific endeavours?

Scientists confirm that the Bush II regime suppressed science that did not agree with the regime's political platform:

Most scientists had heard at least a little about claims that government scientists were not allowed to report research findings that conflicted with the Bush administration’s point of view. And the vast majority (77%) says that these claims are true.

(Pew Research). When you combine government science police with government suppression of science the government does not agree with, you can easily have the institutionalization of propaganda.

The next post in this series is here.
Posted by Dredd at 2:01 PM