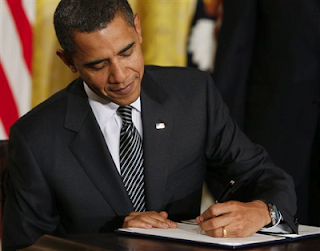 Check out the photo I snapped of the Fraud Enforcement and Recovery Act at yesterday's White House signing ceremony!

It's time to crack down on the financial fraudsters who have wreaked havoc on our economy and America's hard-working families -- and now we have the tools to do it.

Yesterday I joined President Obama at the White House as he signed the Fraud Enforcement and Recovery Act into law, a bill I wrote to provide federal law enforcers with the resources they need to go after white-collar criminals.

With your help, and thanks to the support of more than 20,000 people who emailed their Senators and Representatives through the LeahyForVermont.com website, Congress passed a strong, bipartisan bill to tackle the scourge of fraud and recover taxpayer money lost due to illegal financial dealings.

The Fraud Enforcement and Recovery Act will protect Americans by:

* Increasing resources for federal investigators and prosecutors to go after cases of financial fraud,

* Modernizing fraud and money laundering statutes to deal with the growing wave of fraud,

* Strengthening the False Claims Act to better equip the Justice Department to recover the proceeds of fraud, and

* Establishing a Financial Crisis Inquiry Commission to investigate the root causes of the economic and financial crisis.

Now that President Obama has signed this important bill into law, the LeahyForVermont.com community can chalk up yet another legislative victory for the American people.

Thank you for all that you have done to put the Fraud Enforcement and Recovery Act on the President's desk -- and on the books.

Patrick Leahy
U.S. Senator
Posted by Dredd at 9:58 AM