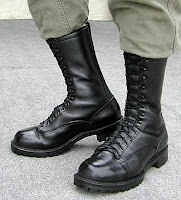 It is interesting how words and phrases change meaning as empires and nations change who and what they are!

I once heard the saying "Your mother wears combat boots" as a child, and wondered what it really meant.

I detected that it could be derogatory but was not sure.

One source zeros in on the origin as:


Armys in the field used to have "camp followers" who were , in essence, prostitutes for the soldiers. The first thing they would bargain for was a good pair of boots because following an army involves walking through a lot of muck, as you can imagine!

So the insult evolved among soldiers and is like saying "You son of a whore!"

(AskVille, see also A Dictionary of Catch Phrases, Second Edition, by Eric Partridge & Paul Beale). Ouch! It was derogatory. Many sources come to the same conclusion that it originated about WW I, and was derogatory.

War was considered to be America's greatest enemy by great patriots of old, and thus the derogatory link.

To apply the saying to a deity would simply be another way of saying "My god is better than your god".

The Bush II regime, with Donald Rumsfeld at the Department of Defense, felt that its god wore combat boots and was better than the god of Muslims in Iraq.

Official memos quoted Bible verses in a cafeteria fashion designed to denigrate the Iraqi Muslims and celebrate and exalt Bush II's god, which is standard fare in the "My god is better than your god" world of things.

It was the same ideology, different direction, when hate filled individuals tried to blow up a Jewish worship building but were arrested.

They were in effect saying "my god is better than your god" so we are blowing up your worship building.