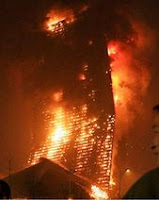 After all, he was the Vice President, which he interprets as President of Vice.

He even said that his office was not part of the Bush II administrative offices.

Ok, if you say so Mr. President of Vice.

I have two questions for you.

First, why did you begin torture so very soon after 9/11 to try to make a connection between that event and Iraq?

And second, have you heard about the futuristic skyscraper shown in the photos?

It is located in down town Beijing, China, and was designed with a non-cube futuristic shape which held exactly to form during a fire a hundred times more intense than the WTC 7 fire.

It did not collapse into its own footprint in about 6 seconds even during exposure to a fire a hundred times more severe than the one you say brought down WTC 7 that day.

It is still standing as testimony that something does not pass the smell test.

The 9/11 Commission, which your office lied to, concluded on information given to it by detainees you were torturing 9 months before that commission was even formed.

Are you going to tell us the truth this time?

Email ThisBlogThis!Share to TwitterShare to FacebookShare to Pinterest
Labels: 9/11, Cheney