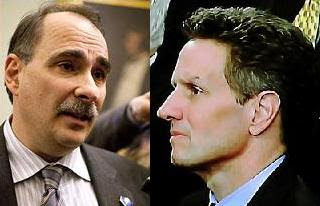 David Axelrod is primarily the one who made the Obama campaign aware of the reality that the last election for president was a rejection election.

A full on rejection of the status quo that had prevailed for almost a decade in DC.

A rejection of the robber barons and their lies and their propaganda.

Forgetting all that, possibly because he is dealing with the many catastrophes he inherited from them, President Obama has listened to voices from areas where he has no personal expertise.

Obama has ventured into more than simply working with those who know where the skeletons and bodies are buried.

Evidently he ventured into that minefield because he has concluded that it would make some of the remedial work easier to accomplish.

He has ventured into the murky shadows and swamps of trusting those who perpetuated that hated status quo, yes the realm of Wall Street dogma and propaganda as a deliberate tactic.

In round one of Axelrod v Geitner the latter won. Which means to a certain degree that the status quo won.

Which means to a certain degree that Obama may have suffered a set back, in the sense that he has been somewhat detached from the wisdom and understanding of how the public feels.
Posted by Dredd at 7:42 AM