Death Penalty For Being Late 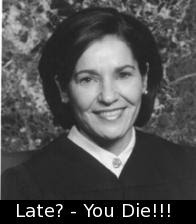 In Texas nine people are or were facing death because their lawyers filed appellate papers late.

And the judge has a personal pet peeve about being prompt.

Six of the appellants whose lawyers filed papers late have already been executed.

If Texas justice is no better than Illinois, that means the chances are high that some of those executed were innocent:


When I started to read this post I assumed it was an article about cases from decades ago. In Illinois the state responded to this type of problem with forming a capital litigation bar requiring a certain resume of murder and serious felony work aswell as requiring specific CLE requirements (more people on Illinois death row have been found factually innocent than executed since the death penalty was reintroduced).

Calls for speedy justice in capital cases no doubt have lead to innocents being executed in places like Texas.

(Comments). The chief judge of the Texas Court of Criminal Appeals is being judged as to whether or not she can continue to be a judge.

One of the six appellants was put to death because the lawyer was 20 minutes late and she said "we are closed".

Perhaps she would do better as a timer at NASCAR races?
Posted by Dredd at 8:43 AM