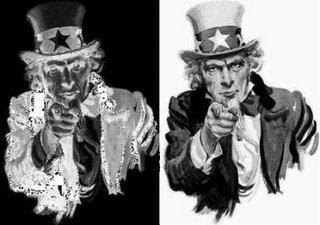 We have been writing about America's shame memo's, and have been giving each one of them a sequential number as we moved along. Now it is becoming apparent that there will be too many of them for the numbers to matter.

So we have changed the sequence to "next", and will link back to the former one, instead of numbering them on and on.

That way you can go to the next one should you choose to.

Newsweek is reporting that the Obama Administration is preparing to release the Ugly Big Brother memos:


Over objections from the U.S. intelligence community, the White House is moving to declassify—and publicly release—three internal memos that will lay out, for the first time, details of the "enhanced" interrogation techniques approved by the Bush administration for use against "high value" Qaeda detainees. The memos, written by Justice Department lawyers in May 2005, provide the legal rationale for waterboarding, head slapping and other rough tactics used by the CIA. One senior Obama official, who like others interviewed for this story requested anonymity because of the issue's sensitivity, said the memos were "ugly" and could embarrass the CIA. Other officials predicted they would fuel demands for a "truth commission" on torture.

(Newsweek, emphasis added). If history is to be the judge and arbiter of this upcoming scenario, next will come the Nuremberg Defence, which we wrote about not too long ago.

"I was only following orders when I tortured people" who had been turned in, fingered, ratted on, and outed by warlords and other strangers who were paid big money for doing so ... the Nuremberg Defence.

Those we paid this big money to included the social enemies, competing drug smugglers, or political competitors of these people who became homeless at Guantanamo. It is so Nuremberg.

Some were teens. Most were innocent. It is so holocaustal.

We paid people who could not speak English to say their enemies were bad guys, and then we tortured them because we were told they were our enemies.

How much you want to bet that these rewards did not stop with the Afghan warlords and liars, but went also to Rumsfeld, Cheney, and those doing the torture they orchestrated?
Posted by Dredd at 5:07 PM