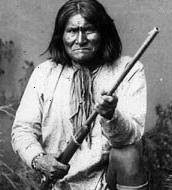 The robber barons wanted his soul but they could only steal his bones.

It is a college frat prank to them, but it is a crime to the rest of us.

Geronimo's descendants are reminding us once again of such indignities by filing a lawsuit in federal court to retrieve his remains from the frat freaks.

They have been fighting terrorism for 200 years.

An article at Huffington Post details the indecent behavior of the air heads who delight to engage in various indecencies as a matter of course.

Robber barons and warsters are expected to behave that terrorist way I suppose.

They even supported King George during the American Revolution and wanted to continue slavery a century later.

The next post in this series is here.
Posted by Dredd at 10:30 AM