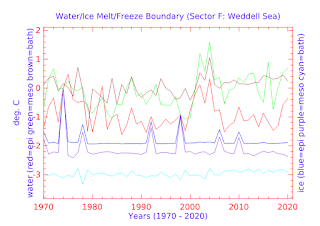 As I mentioned in yesterday's post (Quantum Oceanography - 5), the WOD updated its vast database, so I am updating some additional graphs today as I did yesterday.

The graphs being updated today concern the temperature at which glacial ice melts at the depths along the grounding lines of tidewater glaciers all along the coastlines of Antarctica.

The bottom line is that the ambient water temperature suffices to cause glacial ice it is close to, or in contact with, to melt (Quantum Oceanography - 5).

Since the ice we are talking about is grounding line ice, this contributes to sea level rise. 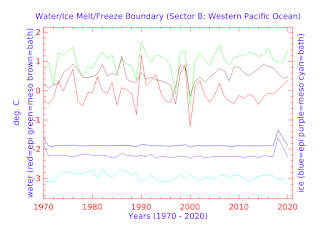 The way the graphs are set up is that the temperatures of the ambient seawater are represented by the top three graph lines.

The three lines at the bottom of the graphs represent the temperature at which the glacial ice melts at that depth.

Again, each color represents a different depth, as detailed on each graph. 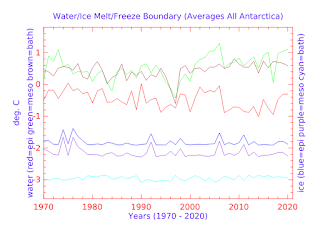 Each graph represents a different sector of Antarctica (except the one that is a mean average combination of all sectors).

The location of the relevant 'Sectors' and WOD Zones are depicted in prior posts (see e.g. HTML Sector Data and Antarctica 2.0 - 11).

The important take home here is that the conditions fit in with Scientific American's declaration that we are living in a time of climate emergency (We Are Living in a Climate Emergency, and We’re Going to Say So). 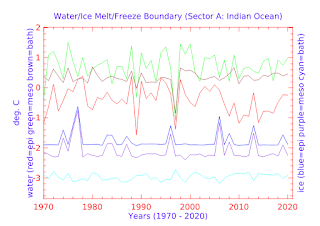 How the melting Antarctic glacial ice fits into that scenario is that the equivalent of a couple hundred feet of sea level rise is contained in the ice sheet of Antarctica (USGS).

This is why Dredd Blog has been focused on the existential danger that sea level change presents (e.g. Why Sea Level Rise May Be The Greatest Threat To Civilization, 2015).

The recent event where a container ship got stuck in the Suez Canal and damaged international sea trade enterprise, because many ships could not continue to their destination, etc., illustrates (as a microcosm) the dangers sea level change can bring to world trade (Seaports With Sea Level Change, 2, 3, 4, 5, 6, 7, 8, 9, 10).