The Authoritarianism of Climate Change - 2

To be honest, I don't know if I put today's post in the correct series.

I didn't know whether to put today's post in this series that began as The Authoritarianism of Climate Change  or instead put it in the Global Warming Induced Climate Change Is A Matter of Law series.

After viewing the videos at the bottom of today's post by Col. L. Wilkerson and R. Admiral Tilley, I chose this series.

Seemingly, in stark contrast to what is generally thought, some kids, some activists, and a scientist ("The American Children"), sued President Obama and Humble Oil-Qaeda ("POHO") in a federal court in Oregon:


"Plaintiffs in this civil rights action are a group of young people between the ages of eight and nineteen ("youth plaintiffs"); Earth Guardians, an association of young environmental activists; and Dr. James Hansen, acting as guardian for future generations. Plaintiffs filed this action against defendants the United States, President Barack Obama, and numerous executive agencies. Plaintiffs allege defendants have known for more than fifty years that the carbon dioxide ("CO2") produced by burning fossil fuels was destabilizing the climate system in a way that would "significantly endanger plaintiffs, with the damage persisting for millenia." ... Despite that knowledge, plaintiffs assert defendants, "[b]y their exercise of sovereign authority over our country's atmosphere and fossil fuel resources, ... permitted, encouraged, and otherwise enabled continued exploitation, production, and combustion of fossil fuels, ... deliberately allow[ing] atmospheric CO2 concentrations to escalate to levels unprecedented in human history[.]" ... Although many different entities contribute to greenhouse gas emissions, plaintiffs aver defendants bear "a higher degree of responsibility than any other individual, entity, or country" for exposing plaintiffs to the dangers of climate change.
...
This is no ordinary lawsuit. Plaintiffs challenge the policies, acts, and omissions of the President of the United States, the Council on Environmental Quality, the Office of Management and Budget, the Office of Science and Technology Policy, the Department of Energy, the Department of the Interior, the Department of Transportation ("DOT"), the Department of Agriculture, the Department of Commerce, the Department of Defense, the Department of State, and the Environmental Protection Agency ("EPA")."

(JULIANA et al. v U.S.). Right away POHO moved the federal court in Oregon to dismiss the case for failure to state a claim upon which relief can be granted.

The case was, as is typical, referred to a Magistrate Judge who recommended that the court deny the POHO motion and allow The American Children to proceed with the case.

The court held, among other things, that:


"The public trust doctrine defines inherent aspects of sovereignty. The Social Contract theory, which heavily influenced Thomas Jefferson and other Founding Fathers, provides that people possess certain inalienable rights and that governments were established by consent of the governed for the purpose of securing those rights. Accordingly, the Declaration of Independence and the Constitution did not create the rights to life, liberty, or the pursuit of happiness - the documents are, instead, vehicles for protecting and promoting those already-existing rights.
...
Plaintiffs' claims rest "directly on the Due Process Clause of the Fifth Amendment." Davis, 442 U.S. at 243 (1979); see also Carlson v. Green, 446 U.S. 14, 18 (1980) ("[T]he victims of a constitutional violation by a federal agent have a right to recover damages against the official in federal court despite the absence of any statute conferring such a right.") They may, therefore, be asserted in federal court.
...
I ADOPT Judge Coffin's Findings & Recommendation (doc. 68), as elaborated in this opinion. Defendants' Motion to Dismiss (doc. 27) and Intervenors' Motion to Dismiss (doc. 19) are DENIED.

IT IS SO ORDERED."

(ibid, JULIANA et al. v U.S.). The case will now proceed to the Federal Court of Appeals for the Ninth Circuit if the POHO defendants decide to take an interlocutory appeal at this time, instead of letting it go to trial.

This case is brought at a time when the scenario described by Col. Wilkerson (even before he knew of the election results) is "extremely dangerous" (see first video below !).

Add to that the intention of the Republican Party to load the Supreme Court with climate change deniers, and it adds up to an increased likelihood of a constitutional crisis in our near future.

Unless the W Direction is changed, The American Children will eventually lose this case in the alt-right supreme court, and who knows what else.

I am reminded of a quote in a previous Dredd Blog post:


"THESE are the times that try men's souls. The summer soldier and the sunshine patriot will, in this crisis, shrink from the service of their country; but he that stands by it now, deserves the love and thanks of man and woman. Tyranny, like hell, is not easily conquered; 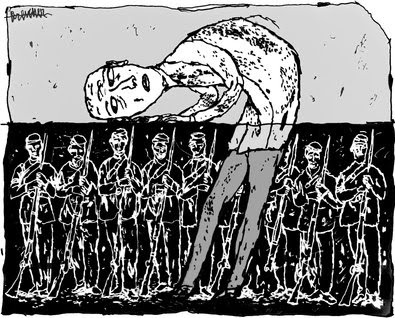 yet we have this consolation with us, that the harder the conflict, the more glorious the triumph. What we obtain too cheap, we esteem too lightly: it is dearness only that gives every thing its value. Heaven knows how to put a proper price upon its goods; and it would be strange indeed if so celestial an article as FREEDOM should not be highly rated. Britain, with an army to enforce her tyranny, has declared that she has a right (not only to TAX) but "to BIND us in ALL CASES WHATSOEVER" and if being bound in that manner, is not slavery, then is there not such a thing as slavery upon earth. Even the expression is impious; for so unlimited a power can belong only to God."

(Stockholm Syndrome on Steroids? - 2). "The King Can Do No Wrong" ideology is creeping back into our lives it would seem (Sovereign Immunity Source: Toxins of Power?).

See "you in the camps", and see what this very aware Ret. Army Colonel says:


Ret. Navy Adm. Tilley about a decade ago: