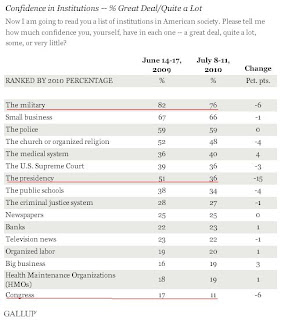 In the first post of this series, we pointed out that most Americans polled in an annual Gallup Poll think that the military is the most competent institution in America.

The words from December 23, 1776 should ring a few bells, since they are the words from a span of time when the 99% were pregnant with revolution in the air, and ready to give birth to a new nation by dispensing with the 1% control over them:


THESE are the times that try men's souls. The summer soldier and the sunshine patriot will, in this crisis, shrink from the service of their country; but he that stands by it now, deserves the love and thanks of man and woman. Tyranny, like hell, is not easily conquered;

yet we have this consolation with us, that the harder the conflict, the more glorious the triumph. What we obtain too cheap, we esteem too lightly: it is dearness only that gives every thing its value. Heaven knows how to put a proper price upon its goods; and it would be strange indeed if so celestial an article as FREEDOM should not be highly rated. Britain, with an army to enforce her tyranny, has declared that she has a right (not only to TAX) but "to BIND us in ALL CASES WHATSOEVER" and if being bound in that manner, is not slavery, then is there not such a thing as slavery upon earth. Even the expression is impious; for so unlimited a power can belong only to God.

(The Crisis, by Thomas Paine, 1776, emphasis added). Mr. Paine was not playing the race card of any race when he used the word "slavery", nor did he try to hide the 800 lb. gorilla in the room, the military, which he considered to be an adjunct to that tyranny.

The notion that the military is a free-people's worst enemy, rather than the most competent democratic institution, is a truth that was well known and well established in the early America of our founders: 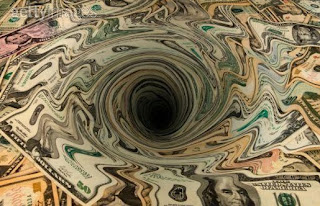 (Greatest Source of Power Toxins, quoting James Madison, emphasis added). Yet here we are some 235 years later, yes, here we are back into the same tyrannical scenario, a scenario Dredd Blog set forth in a fairly recent post:


... the direction our nation is headed is to become a Big Brother Plutonomy at home, with a national foreign policy of Wartocracy, and a large domestic Police-Secretocracy to put down any resistance or rebellion within the homeland itself ... this end-game is already in place, but at this time somewhat hidden in the corporate media generated shadows, with the full backing of militant forces within and without, all eager and willing to make themselves known, by coming out of the closet ... the phrase "9/11 changed everything" means a departure, in terms of direction, from controlling the populace primarily via propaganda, which has been the model since about World War I, to a model of controlling the public once again primarily by force.

(The Homeland: Big Brother Plutonomy). That post quotes military sources and the main stream media, not left or right wing blogs, to prove the point.

The "slavery" or "involuntary servitude" Thomas Paine spoke of above is one of those unspoken Stockholm Syndrome conditions, unrelated to race.

But whether such conditions are race based or ideologically based, they are commonly hidden in plain sight within our culture from time to time:


"I wonder, John Lomax asked Blind Willie McTell, "I wonder if, if you know any songs about colored people havin' hard times here in the South" ... "Any complainin' songs, complainin' about the hard times and sometimes mistreatment [by] the whites?

Have you got any songs that talk about that?" ... No, McTell said at once, he had no such songs, "not at the present time." Those were the songs of another era, but now "the white peoples is mighty good to the southern people, as far as I know" ... Read one way, Lomax's conversation with McTell is a tense social transcript from the Jim Crow South. Lomax, the overbearing if well intentioned white visitor, wants musical documents of poverty and racial oppression. The request may connote obliviousness on his part, as well as a condescending sympathy for blacks, but it is nevertheless rude and insulting, demanding that the singer violate basic, unspoken southern norms that should have been familiar to anyone reared in Texas. McTell knows better than to say anything against white people, let alone sing it, to a white man with even the hint of a southern accent and his wife, especially if ... a recorder is running ... McTell makes it clear that he knows songs that Lomax wants to hear ... he would never play them ... but to say as much and explain why would also violate the Jim Crow norms by making them explicit.

(Bob Dylan In America, Chap. 6, by Sean Wilentz, emphasis added). Are there any journalistic, unspeakable, and publicly known "words" in America today, words or ideas that would be considered to be "unspeakably rude" by our "free press", our main stream media?

Of course, because many subjects are considered to be taboo, and must remain unspoken lest the journalist be blacklisted and banned (recent examples are Keith Olbermann, Cenk Uygar, and David Shuster of MSNBC).

Or take for another example Independent Party member, Governor Jesse Ventura, who says he is protesting by no longer standing when the National Anthem is played, saying he is protesting, among other things, media censorship of his even mentioning his views (which criticize the military) as to the 9/11 story.

On Dredd Blog we use "Blind Willie McTell" as a metaphor or caricature of the American Mainstream Media, which is comprised of a few for-profit corporations.

That is why Chapter 6 of the Sean Wilentz book (ibid), concerning the actual Blind Willie McTell, struck me: 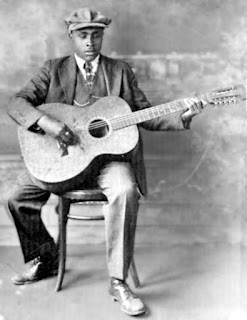 John Lomax, the archivist and collector, certainly wants what he wants, but ... McTell simply doesn't have it. The music that McTell knows best and prefers to perform carries no overt or even hidden social or political meaning. There are no old-fashioned sorrow songs about the black man's plight in his regular repertoire (and certainly not in his records, even though they are intended for the black "race record" market). His songs are up-to-date, and they are about sadness in love and gladness in love, drinking too much, benign nonsense, God, gambling, violence (much of it involving blacks attacking or killing other blacks), honoring life and death ... McTell is not a sharecropper or big-city laborer; he is a professional performer in a growing southern city. He lives within the iron structures of segregation ... and now he is making a very decent living playing music for whites as well as blacks and getting recorded commercially. For a black Atlantan in 1940, this amounted to a comparatively easy experience with white people -- while taking their money ...

(ibid). McTell is the consummate caricature for representing the for-profit, money oriented, corporate press, who make their living from selective news, like McTell made from his selective music.

If becoming more well to do, compared to his fellow blacks, required McTell to hold his tongue or to become a denier, lest he suffer (if he broke the unspoken, but totally binding, Jim Crow norms required for "black speech") he, like other southern blacks and like the U.S. press (newspeak), did it.

In this "Stockholm Syndrome on Steroids?" series Dredd Blog has pointed out that the military is now held in a mysteriously high regard, which is at odds with our American traditions written about above.

In fact, the military has by now been virtually made into a religion that cannot be negatively spoken of, lest those unspoken MOMCOM norms be violated.

This is clearly the work of an incessant propaganda campaign that has turned the disease of war into the art of deception, and has turned yet another hidden slavery or involuntary servitude into something to not be spoken of by the press.

"Unthinking respect for authority is the greatest enemy of truth." --Albert Einstein


Lyrics to this song are here.